There are only two changes to Wasps’ starting XV that won 35-15 against Saracens a fortnight ago.

Ashley Johnson and Phil Swainston start in the front row alongside Matt Mullan, with Tommy Taylor and Marty Moore returning to fitness to take a place on a strong bench where all replacements will be looking forward to making a big impact.

James Gaskell has also recovered from a calf injury to return to the match day squad, while Kearnan Myall is ruled out by a knee injury.

Meanwhile, hooker Tom Youngs will make his 100th starting appearance for Leicester Tigers on Saturday when he leads the club in their 13th successive season in the knockout stages of the Premiership Rugby season. 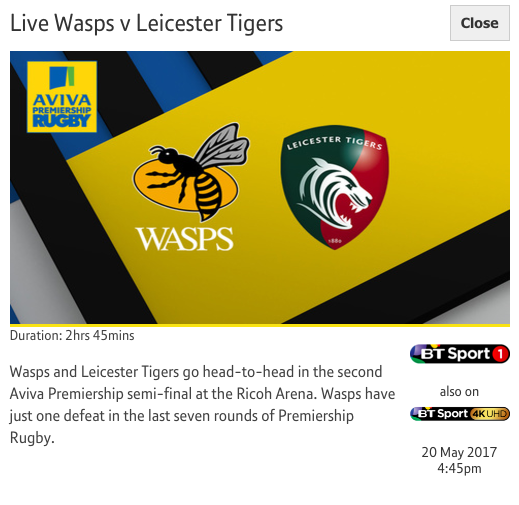 Club captain Youngs is joined in the front row by Ellis Genge, who was this week named as Premiership Rugby’s Land Rover Discovery of the Season, and British & Irish Lions selection Dan Cole.

The only change in the forward pack from the starting line-up in the Round 22 victory over Worcester Warriors is the inclusion of Mike Fitzgerald in the back row, with Mike Williams among the replacements.

Telusa Veainu returns from injury to start at full-back after missing the wins over Worcester and Sale Sharks but Tigers are without JP Pietersen, Maxime Mermoz and Tom Brady due to injury.

Ed Slater is also included in the match 23 after his recovery from injury.