Les Bleus are up two places with Los Pumas falling to their lowest position for 16 months.

While England rewrote the record books once again in completing a 3-0 series win over Australia, perhaps the most eye-catching performance of the weekend came from a French team who’ve had to take a few steps back to go forward under head coach Guy Noves.

Six days after slipping to their lowest position of ninth since the World Rugby Rankings were introduced in October 2003, as a result of their 19-30 loss to Argentina in the first test at the Stade Monumental Jose Fierro in Tucumán, Les Bleus bounced back in style to win 27-0 against the same opposition at the same venue to level the series and earn themselves two and two-thirds rating points, which is enough to lift them up two places in the rankings to seventh.

By contrast Argentina were the biggest losers of the weekend from a rankings perspective, dropping four places to go from fifth to ninth.

Not since February 2015 have Los Pumas been as low in the rankings, and not since 1949 have they failed to score a point in a match against Les Bleus.

Wales and Ireland, despite being beaten by New Zealand and South Africa, benefitted from Argentina’s demise by moving up one place to fifth and sixth respectively.

At the top, it’s a case of as you were with New Zealand, England, South Africa and Australia still occupying spots one to four. 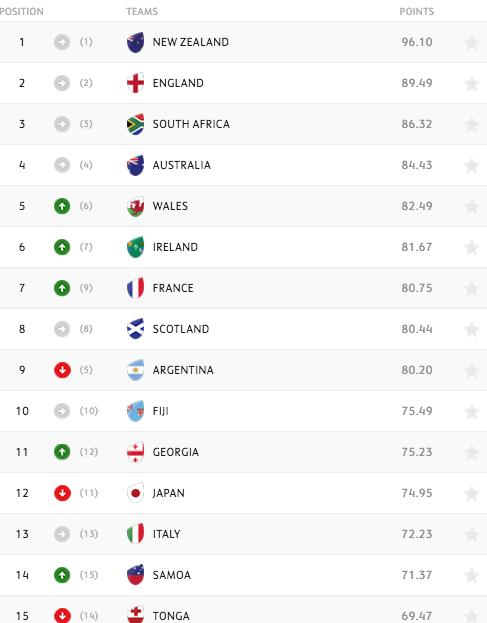