While Ireland celebrated their third Grand Slam, Scotland were the only movers in the top 10 of the World Rugby Rankings following the final round of the NatWest Six Nations Championship.

As he has done so many times before, Greig Laidlaw stepped up to kick the last-gasp penalty that spared the Scots from defeat at the Stadio Olimpico in Rome, Gregor Townsend’s side emerging with the tensest of 29-27 victories.

The three-hundredth of a point on offer for their first away win of the season took Scotland above South Africa and into fifth, the position they were at the start of the Championship. Italy are also unchanged over the duration of the competition, in 12th place, but with 71.10 points instead of 71.25. 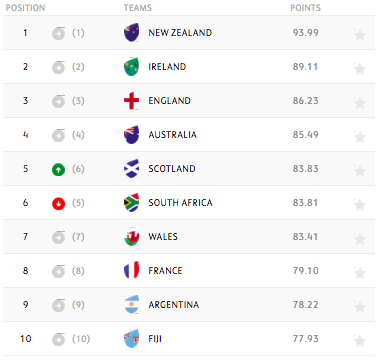