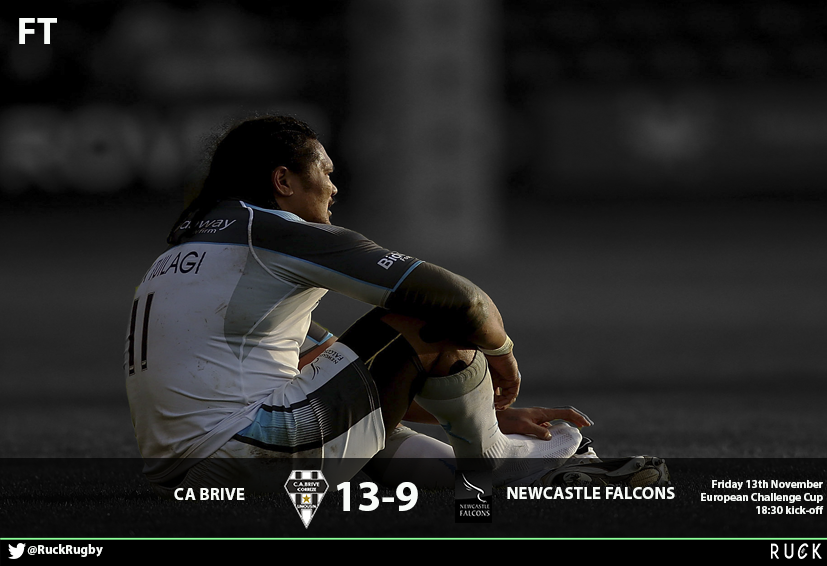 CA Brive 13-9 Newcastle: Falcons edged out in close encounter on their travels

Despite a much-improved display from Dean Richard’s Newcastle Falcons, they were unable to avoid defeat as CA Brive narrowly came out on top in their opening round clash in the European Challenge Cup in France on Friday night.

The defeat is the Falcons fifth straight loss in all competition since they kicked off their 2015/16 Aviva Premiership campaign and is the second game in the last three where the men from the North East have failed to score a try.

Nevertheless, the losing bonus point recorded is the first they have accumulated in any competition this season and it would have also been a relief to their loyal fans to see finally their scrum functioning to a more acceptable standard than in recent weeks.

Newcastle fell behind after the hosts opened the scoring through Malakai Bakaniceva after 17 minutes. The powerful Fijian international wing crashed over the whitewash for what proved to be the games only try following a well-worked lineout set piece.

Fly-half Nicolas Bezy added the conversion before kicking two penalties to give Brive a convincing lead, 10-0.

Tom Catterick got the Falcons deservedly on the scoreboard from the tee after 34 minutes but Bezzy kicked a penalty goal of his own soon after to ensure the hosts held a 10-point lead at half-time.

The Falcons number 10 kicked another penalty four minutes after the restart to reduce the deficit before another successful effort from the tee just after the hour to bring the visitors within four points, 13-9.

Brive then had the opportunity take three points but instead went for the corner as they looked to put the game to bed. The hosts successfully kept hold of their lineout but were held up superbly by Newcastle before Rob Hawkins managed to turn the ball over.

Former sevens star Marcus Watson had a chance to snatch the win for the spirited visitors, but Richard Mayhew’s pass was behind him, and the chance went begging, meaning the nervous-looking hosts held on for what could be a significant victory come the end of the Pool stage.

Next up for the Falcons in the Challenge Cup is Russian side Enisei-STM at Kingston Park next Sunday while Brive return to action a day prior with a testing trip to Ireland to face the in-form Connacht Rugby at the Galway Sportsgrounds.

The Fijian powerhouse scored the crucial score as CA Brive edged to a narrow victory against Newcastle Falcons in their Challenge Cup opener on Friday night. He consistently looked dangerous, however, was starved of the ball for long periods of the game, which is probably why it was a low scoring affair..