I’m not a sore loser. Really, I’m not. After England lost to New Zealand – once I’d finished crying into my pint and screaming at the television – I was really pretty relaxed about the whole thing.

We’d played alright and taken the world’s best team over the last decade to within a point…not a bad day’s work. I’d even begrudgingly accepted ‘that’ Courtney Lawes decision as being probably correct. Everything was set for me to continue life as a normal human being and move on.

However, I have too much spare time and not enough mates, and so I re-watched the game; specifically the ‘incident’. Again and again. And something still didn’t sit right with me.

Then, suddenly, it clicked – and by suddenly, I mean over a period of hours in which I studied various definitions and signed up for World Rugby’s Regulation website – Courtney Lawes was categorically not offside. I could now bathe in the waters of righteousness and legitimately bleat on and on about how ‘we were robbed’ to anyone who would listen. Which was unsurprisingly few people, but at least I now know how it feels to be Scottish.

Of course, this is all a moot point. England lost, the All Blacks won (again), and despite my poorly-received petition to have the result reversed, it won’t have a bearing on the history books. And before you roll your eyes and say “Wow, loser, get over it, England lost, they threw it away, GO THE MIGHTY ABS, justice for dodgy decisions against Wales, South Africa etc”, I completely agree with you. But I’m English, and I like moaning. So here we are.

When Garces went ‘upstairs’, I assume it was because he was as surprised as the rest of us that we had managed to score…surely there must be something amiss? And, lo and behold, Courtney Lawes’ elastic legs appeared to have creeped in front of the offside line. When looking at the replay, Marius Jonker seemed to be applying the ‘ruck’ offside rule, which states:

“Each team has an offside line that runs parallel to the goal line through the ruck participants’ hindmost foot”. (Rule 15.3)

Looking at the picture, there are no English players in the ‘ruck’ (more on that later), so we take the furthest foot of the All Blacks at the time TJ Perenara picks the ball up – and that hefty hoof appears to belong to Ofa Tuugafasi. If you watch the replay, Lawes is onside until a second before Perenara goes to kick, and is only moved to an offside position when the ‘ruck’ – and Tuugafasi’s boot – rumbles forward by about a meter. Boom. Offside. I could live with that.

The ‘offside’, as called by the TMO

But then my eyes wondered to Matt Todd, who must be the longest serving third-choice openside flanker in international history (albeit he’d be first choice pretty much anywhere else).  Todd is initially bound to the ‘ruck’, but then it shifts forward, leaving Todd with a single hand seductively placed on the ample cleft of Dane Coles’ junk.  Another flick through the rule book reveals that, at a ruck:

“A player must bind onto a teammate or an opposition player” (Rule 15.7).

And what is a bind I head you ask?  (You probably didn’t).

The Rules define a bind as “Grasping another player’s body firmly between the shoulders and the hips, with the whole arm in contact from hand to the shoulder”.

Todd has a hand lightly placed Coles’ right cheek.  Meaning he is not bound, meaning the ball is now out of the ‘ruck’, meaning it’s open play, meaning there are no offside lines, meaning Lawes is onside, meaning GLORY FOR ENGLAND AND SAM UNDERHILL.  Or something like that. 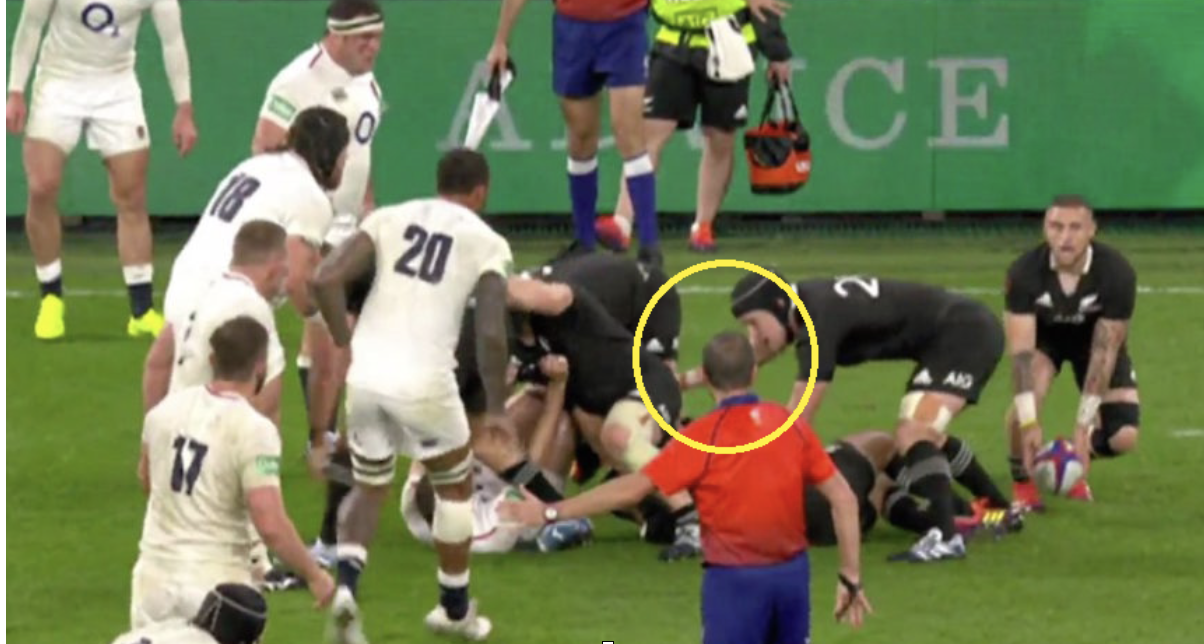 The gentleman’s caress, which is not a ‘bind’.

Smug at my achievement of unravelling something which would have no effect at all on the game or the result, I sat back before a shocking revelation of M Night Shyamalan proportions hit me.  There was no ruck.  In what can only be described as the rugby equivalent of the twist in the Sixth Sense, I see no English people in that ‘ruck’.  A ruck is only formed when “at least one player from each team are in contact, on their feet and over the ball..” (Rule 15.2).

Watch the replay.  George Ford makes the tackle on Mo’unga and, faced with Coles and Tuugafusi’, the men in white are wise enough not to bother getting involved.  This instead, makes a ‘tackle’ offside situation, the kind of rule introduced to stop those pesky Italians from ruining the prawn sandwich brigade’s days out at ‘HQ’ by avoiding rucks and, thus offside lines.

Well, this complicates things.  Ford is still involved with the tackle (i.e. next to him on the ground), with the All Blacks players on their feet, over Mo’unga and the ball.  So far, so normal.  The offside line runs level with Ford’s tiny noggin, meaning Lawes appears to be just onside.

Ford rolls away from the tackle zone, so he is no longer involved with the tackle.  It’s this movement that pulls three All Black players away from Todd’s bind, and away from the ball.  By the time Peranara goes to kick, the only player “on their feet over the ball” is the unbound Matt Todd.  His hand, caressing Coles’ bottom, is now the ‘hindmost’ point in the ‘tackle’ situation.  Meaning Lawes, angelic little scamp that he is, is onside by about a metre.  Meaning, once again, glory for England and Sam Underhill. 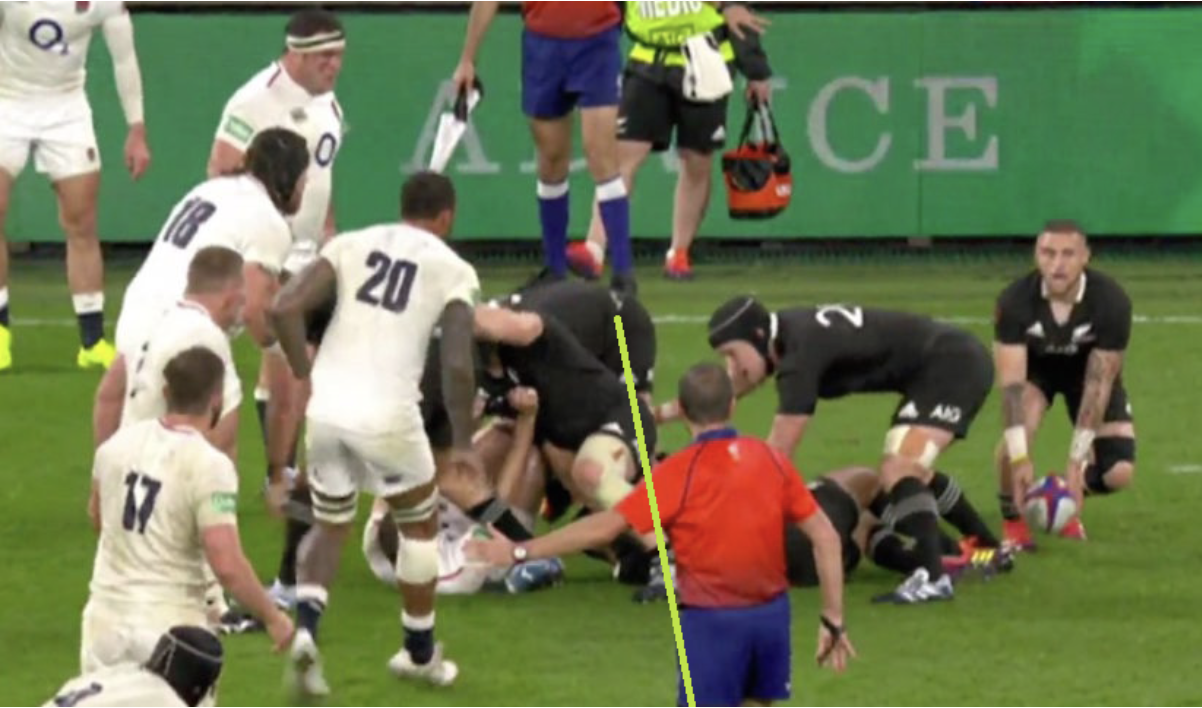 Sadly, nothing I write will ever change the fact that England lost, we threw away a 15 point lead and – let’s face it – I’d have been entirely confident in the All Blacks scoring a winning try in response from the ensuing restart had the try been given.  The sight of Sam ‘no neck’ Underhill running like constipated badger and turning the world’s best player inside out will count for naught.

But at least we can now try some of this judicious moaning that everybody else seems so fond of.

And before you ask, the answer is no.  I am not fun at a party.