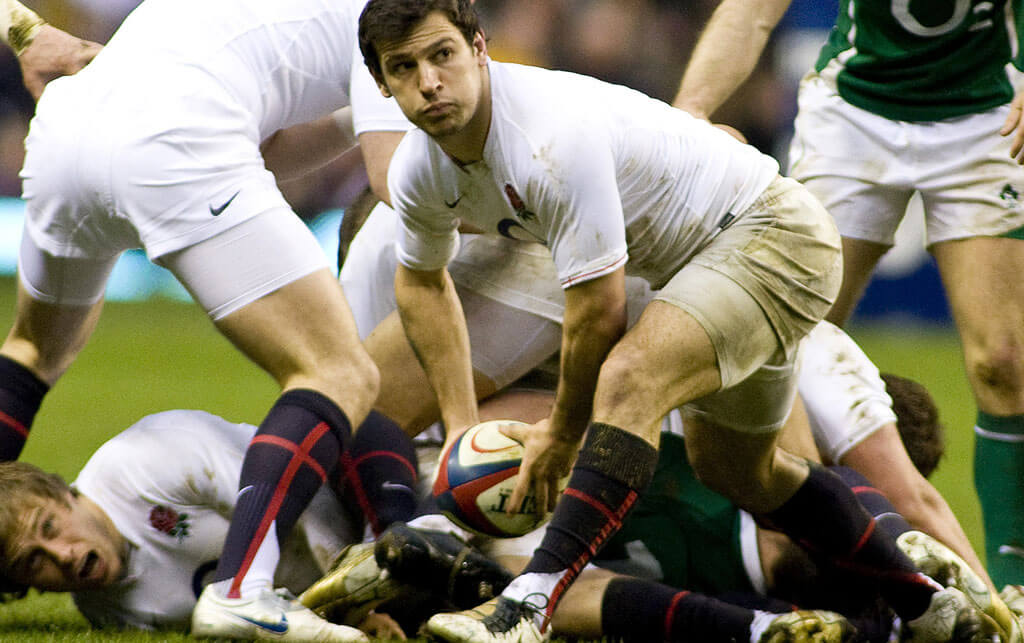 A thrilling 80 minutes in the final pre World Cup warm up clash saw England get back on track whilst condemning Ireland to a second consecutive defeat. The vociferous Twickenham crowd witnessed drama in abundance as England emerged 21-13 victors.

Like Usain Bolt in the 200 metre final two weeks ago, England exploded out of the blocks and passed the ball out wide to Jonny May to cross the whitewash within three minutes of kickoff.

The lanky Gloucester man tore down the wing after a dummy followed by a brilliant looping overhead pass from Ben Youngs sent him hurtling towards the try line and through a feeble Tommy Bowe blockade.

Simon Zebo may look deceptively small but at 6″2 he actually has one inch on Anthony Watson, and yet was inexplicably beaten in the air to Ford’s pass by the pacy Bath winger.

Dave Kearney proved last week against Wales that he is the man to contest those aerial duals at fullback. With such a poor all round performance from Zebo, he should consider himself extremely lucky should he find himself in the starting XV against Canada in two weeks time.

A further five points were added to the scoreboard on 23 minutes in an almost carbon copy of the first, with May providing a brilliant hurdled finish over the line to avoid being tackled. Consultation from the TMO however correctly adjudged that Youngs’ pass had this time been a forward one, and they were chalked off.

England went in 12-3 up at the break with Ford converting May’s try but failing with Watson’s, whilst a Jonathan Sexton penalty only just had the legs to clip the posts and bounce over for the visitors.

Ireland certainly would have been the happier of the two teams at half time, not in terms of their own performance, but the fact that they had played so poorly yet were only nine points down.

Sure enough, they started brightly at the restart despite a lack of ambition from Sexton who opted for the points rather than a scrum from five metres out.

Ford may have kicked the first three points of the second half, but it was Ireland that predictably made England pay for their lackadaisical finishing with a try of their own.

Captain Paul O’Connell bullied his way over the line to drag his side back into the game. For a moment it looked as if the game may turn on its head with O’Connell and co earning redemption for a weak display against Wales.

However it wasn’t to be, with England dominating the final 10 minutes, just as they had dictated the first half. Wave after wave of attacking seemed to have paid off with Richard Wigglesworth crossing the try line, only for yet another five points to be correctly disallowed by the TMO.

Owen Farrell was afforded the final 20 minutes to stake his claim at flyhalf, and converted two penalties that ultimately put Ireland to the sword.

A bungled pass out wide to Mike Brown cost his side a certain try, and the battle of the flyhalfs is set to go down to the wire. Ford was far from convincing from the tee with two successful kicks from three, with one of those kissing the paint work before going over.

Some creative play led to the second try however and he pulled the strings well alongside Ben Youngs, and his match play certainly looks sharper than Farrell’s.

Jonny May proved once again that on his day he can be one of the most dangerous wings in the world, and he gives Stuart Lancaster the right kind of headache with Jack Nowell waiting in the wings – no pun intended.

The forwards improved from the disappointing display in Paris, with captain Chris Robshaw marshaling his troops well.

One man that seemed isolated however was Jonathan Joseph at centre, and Lancaster will be concerned that the side were unable to get the Bath youngster into the game and utilize his devastating pace.

An improved performance for England was far from a perfect one, but their undefeated streak at Twickenham continues and confidence will be renewed heading into their Pool A opener with Fiji.

Ireland meanwhile have a lot of questions to answer, and quickly, as they enter the tournament off the back of two consecutive defeats, as a shadow of their Six Nations winning selves.