Ben Foden scored two tries as Northampton got their Aviva Premiership season back on track with an impressive bonus-point victory against Newcastle on Saturday at Stadium:MK.

Saints, who lost their opening game of the season away at newly-promoted Worcester last Friday night, bounced back to win emphatically, scoring five tries in the process.

The loss for Newcastle means they have lost successive games, and they will now shift their attention to Exeter Chiefs, who they face at Kingston Park next Sunday.

Christian Day’s score after just four minutes got Northampton off to the perfect start. The second-row received the ball from the lineout deep inside the 22 and positioned himself at the back of a powerful rolling maul before forcing the ball down.

Fly-half Stephen Myler converted the score before adding a further six points via two penalties to give Saints a 13 point lead after just 13 minutes.

Falcons number 10 Mike Delany, who signed from Top 14 side Clermont in the summer, then kicked three penalties to cut the gap to just four points, however, just before the half-time whistle Myler restored the hosts seven-point advantage with another successful effort from the tee, 16-9.

After the break, Newcastle was forced to defend heavily and were repetitively being penalized for entering the side of mauls deep in their own 22. Eventually, referee Dean Richards had enough and sent the visitors second-row Todd Clever to the sin-bin.

And with the man advantage Northampton quickly touched down two quickfire tries in a three minutes period to secure the victory. The first saw the Saints maul prove too much for Newcastle again with lock Day forcing the ball down for his second after 54 minutes.

Three minutes later Luther Burrell, who had been a threatening presence all game, picked up the ball from the ruck before darting over from close range. Myler converted the first but missed the second to give Northampton a substantial lead, 28-9.

Saints’ Ben Foden then ghosted in, forcing the ball down despite resistance from Delany and Tom Catterick for the bonus point score after 64 minutes. Myler then made up for his previous miss by adding the extras, which gave the hosts a sizable 26 point lead.

Youngster Tom Penny then grabbed a conciliation try for the Falcons just five seconds after coming on. The score was his first ever Premiership try, and fellow replacement Catterick made no mistakes with the conversion, 35-16.

But the hosts would score again soon after with the impressive Foden again diving over. And Myler converted to complete the convincing victory, 42-16. 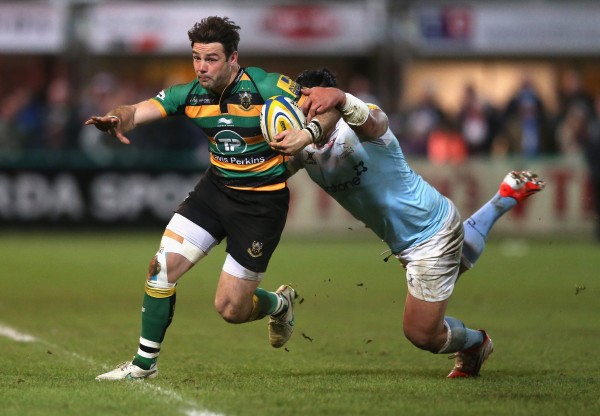 The fullback was exceptional for Saints in attack with his desire and pace allowing him to expose any gap available in Newcastle’s defence. He was fantastic under the high ball and got a pair of well-deserved tries for his monumental efforts. It’s fabulous to see him scoring and playing again after recovering from a serious injury that ended his RWC hopes.