Reigning champions New Zealand face the biggest test of their Rugby World Cup defence so far when they renew their historic rivalry with South Africa in the semi-final this afternoon at Twickenham.

Another win for South Africa would see them become the first team to beat New Zealand three times in the competition, but their recent record against the All Blacks won’t inspire confidence, losing six of their last seven meetings.

New Zealand comes into the game in extraordinary form having won 47 and lost three of their past 52 Tests and are looking to win a record 13th consecutive match at the World Cup.

Moody, who was called up the New Zealand squad following a tournament-ending injury to Tony Woodcock during the pool stage, replaces Crockett after the prop failed to recover from a groin injury he suffered during the All Blackss 62-13 quarter-final victory over France.

Prop Ben Franks is forwarded to the replacements’ bench as cover.

Nehe Milner-Skudder, who has scored five tries at this year’s RWC, has recovered from a shoulder injury sustained last weekend to take his place on the wing.

Meanwhile, Heyneke Meyer, South Africa head coach, has kept faith with the starting XV that overcame Wales 23-19 in the quarter-finals

The only change to the Boks’ matchday squad sees 38-year-old, 125 cap veteran Victor Matfield named as a replacement after overcoming a hamstring injury with Pieter-Steph du Toit dropping out.

This has been a rollercoaster of a World Cup for Meyer’s team from that horror show against Japan to never looking quite comfortable in the win over Wales to reach the last four. No team has ever lost a group game and gone on to win it all.

Coming in as underdogs, the pressure is completely off South Africa’s shoulders as literally everybody expects the All Blacks to win. The Boks’ have exceptional players like Duane Vermeulen and Bryan Habana, however, to beat this New Zealand team they would have to have the game of their lives. The All Blacks are the defending champions and following their complete performance against France last weekend will be high on confidence and momentum heading into the clash. We’ve had plenty of classics so far in this World Cup and this may top the lot. 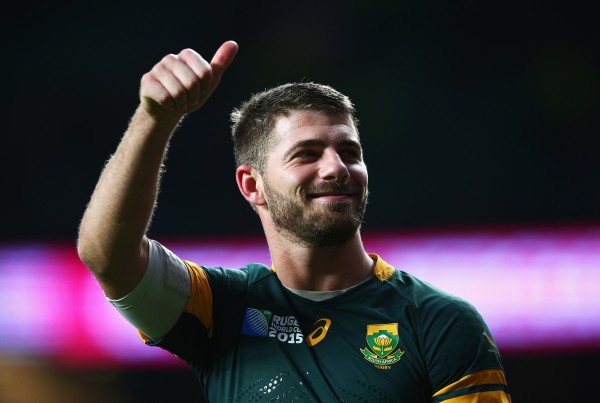 The fullback will have to have the game of his life against the All Blacks. The Springbok will be tested defensively by New Zealand’s ruthless backs but will also have to remain composed under the high ball when tested by Dan Carter and Aaron Smith. At times during the tournament le Roux has been exceptional but in such a huge game like this one there is no room for error.

For a man with so many international tries it’s remarkable that Julian Savea has never scored a Test try against the Springboks. The wrecking-ball wing was at his potent best last weekend as he scored a hat-trick against France, looking incredibly sharp following a disappointing Super Rugby season. He is now tied with Jonah Lomu and Bryan Habana’s record of eight tries in one RWC finals.