Fiji had underlined their status as the world number 1 team by beating Brazil 40-12 in their first game while Argentina edged the USA in session one. 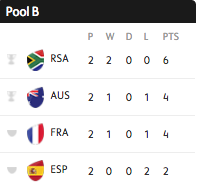 The Aussies took an early lead through John Porch but a brace from Marcos Poggi give Spain an unexpected 12-7 lead. But Australia was in a determined mood with Jesse Parahi charging over to put the men in gold ahead at the break, 14-12. Porch added his second and the Aussies third just after the restart before Con Foley secured the victory with the final play.

South Africa looked like a well-oiled machine, taking less than a minute to open the scoring against France, having brushed Spain aside 24-0 earlier in the day. The Blitzbokke dished out plenty of punishment with Justin Geduld, Kwagga Smith and captain Kyle Brown all in top form as they scored a try each to give SA a 19-0 lead over the French at half time. Dylan Sage added his name to the scoresheet in the second half while Cecil Afrika’s third successful conversion saw the men in green and gold win 26-0. 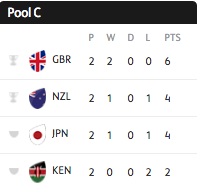 Team GB got off to a winning start by thumping a very dangerous Kenyan team 31-7. They took control of Pool C thanks to a much harder-fought win over the spirited Japanese. The game was deadlocked at 14-all but Marcus Watson was able to cut through the Japanese line at the death to claim a 21-19 victory.

The World Rugby Sevens Series’ all-time leading try scorer Collins Injera got Kenya off to a blistering start. But Injera was then sent to the bin for a head-high tackle on Scott Curry as the New Zealand captain attempted to dive for the line. Curry was falling into the tackle and then spilled the ball, but the referee decided it was a dangerous tackle, awarding a penalty try as well as the yellow card. Akira Ioane added to the score with Kenya down a man, New Zealand stretching the pitch wide to find plenty of open space.

The elder Ioane brother crossed again in the second half but couldn’t ground the ball, losing possession as Injera made a try saving tackle. Nevertheless, Augustine Pulu scored from the resulting 5m scrum, finding a gap after Rieko Ioane was dragged down short of the line.

From there New Zealand were able to make sure of the victory, slowing the play as fresh legs came onto the field and Lewis Ormond scored late to add polish to the scoreline.