Gold medal favourites Australia have led the way after three straight victories and will be joined in the quarter-finals by the likes of New Zealand, Great Britain, France and Canada. Find out who else will join them in the final eight below. 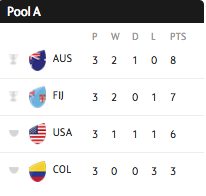 FT: #FIJ secure comfortable win to head through to the quarter finals. Follow all the action https://t.co/kKhvfcvdkX pic.twitter.com/StjMQnqGKV

A strong opening seven from the Fijiana meant they led 24-0 by the break with Raijenli Daveua (2),Lavenia Tinai and Ana Maria Roqica making up the scorers. The Pacific islanders continued to dominate after the restart with Viniana Riwai and Rusila Nagasau adding further gloss to the scoreline.

FT: With that draw, #AUS finish top of Pool A, while #USA finish third #Rugby7s pic.twitter.com/Nt5ztHl2n6

In a relentless first half there was only one try as Emma Tonegato touched down in the corner to edge the Aussies ahead. Jessica Javalet, with a great step and go, levelled after the break for Eagles.  And the former soccer player doubled her tally seconds later, picking up a loose ball and sprinting for the line, 5-12. However, Tonegato followed up and touched down seconds before the hooter. And Chloe Dalton added the extras to tie the match, the first of the tournament. 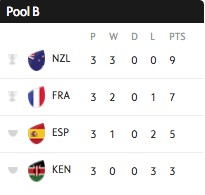 FT: #ESP grab their first win of #Rio2016 and put themselves in the running for a spot in the QFs #Rugby7s pic.twitter.com/GinP7sGrVM

Spain, in their traditional red with yellow kit, struck first through the experienced Barbara Pla. But Kenya, in their black kit, hit back through a fantastic score from Doreen Nziwa to level the scores at the break, 5-5. After the restart Marina Bravo touched down twice in two minutes to give Las Leonas a cushion before Janet Okelo pounced on a loose ball for a consolation try.

New Zealand began irresistibly with wave after wave of slick passing, intelligent movement and blistering pace resulting in tries for Portia Woodman, Kelly Brazier and Huriana Manuel in the first five minutes. Camille Grassineau, who created history when she scored the first-ever rugby sevens try on Saturday, got one back for Les Bleus late in the half, meaning France trailed 19-7 at the break. Kayla McAlister added a fourth try of the match to seal the victory. The convincing win means New Zealand top Group B and will play one of the third-placed teams 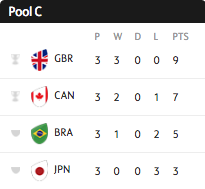 FT: #BRA earn first win of #Rio2016 but it’s not enough to get them into the QFs #Rugby7s pic.twitter.com/Ls9koXEDU2

A huge roar erupted around the Deodoro Stadium as Brazil scored first through Paula Ishibashi. However, right on the cusp of the interval, Japan hit back with a try through Ano Kuwai, 5-5. The Cherry Blossoms then took the lead after the two-minute interval through Marie Yamaguchi but Brazil responded soon after with tries from Beatriz Futuro Muhlbaue, Amanda Araujo and Beatriz Futuro Muhlbauer to secure a historic Olympic win for the hosts.

#GBR earn a big win over #CAN as they top Pool C at #Rio2016 #Rugby7s https://t.co/kKhvfcvdkX pic.twitter.com/IGIpRq82S2

They hadn’t conceded a try on day one but Canada’s defence is breached four times against a resilient GB, whose tackling has been something to marvel. After a tight and tense opening, Team GB opened the scoring through Alice Richardson before Alice Wilson Hardy dotted down a sensational 80m+ try after the hooter to give her side a commanding lead, 10-0. Indiscipline saw both teams down to six players. However, despite the numerical disadvantage, GB secured the win as captain Emily Scarratt ran in a superb brace.