From pace setters to festive flops: Canterbury reveal everything you need to know about the start of the rugby season - Ruck
Skip to content
Rugby News

After a summer dominated by the British & Irish Lions tour of New Zealand and England’s triumphant series win in Argentina, clubs, players, and fans once again turn their attention to the start of Aviva Premiership Rugby.

But who will come out on top? Which clubs have put in the pre-season hours? Who is still recovering from their summer efforts? And when will your team face their toughest test?

To help answer those questions and more, rugby experts Canterbury have compiled the Ultimate Guide to the Season, giving fans an expert insight into the highs-and-lows they can expect over the next 9 months.

By utilising historic match and performance data, Canterbury has been able to predict some of the seasons key talking points before a ball has been kicked, including which team is most likely to win their season opener, who the slow and fast starters are and which games you should be plotting in your diary if you’re looking for high-scoring entertainment.

A breakdown of some of the seasons biggest moments can be found below, while a full guide to the season can be found at https://www.canterbury.com/clubhouse.

By looking at the head-to-head results over the years, Canterbury have been able to predict where each club is likely to face their toughest run-in this season, alongside the dates fans might see their team hit a purple patch of form. A club-by-club guide can be seen here: 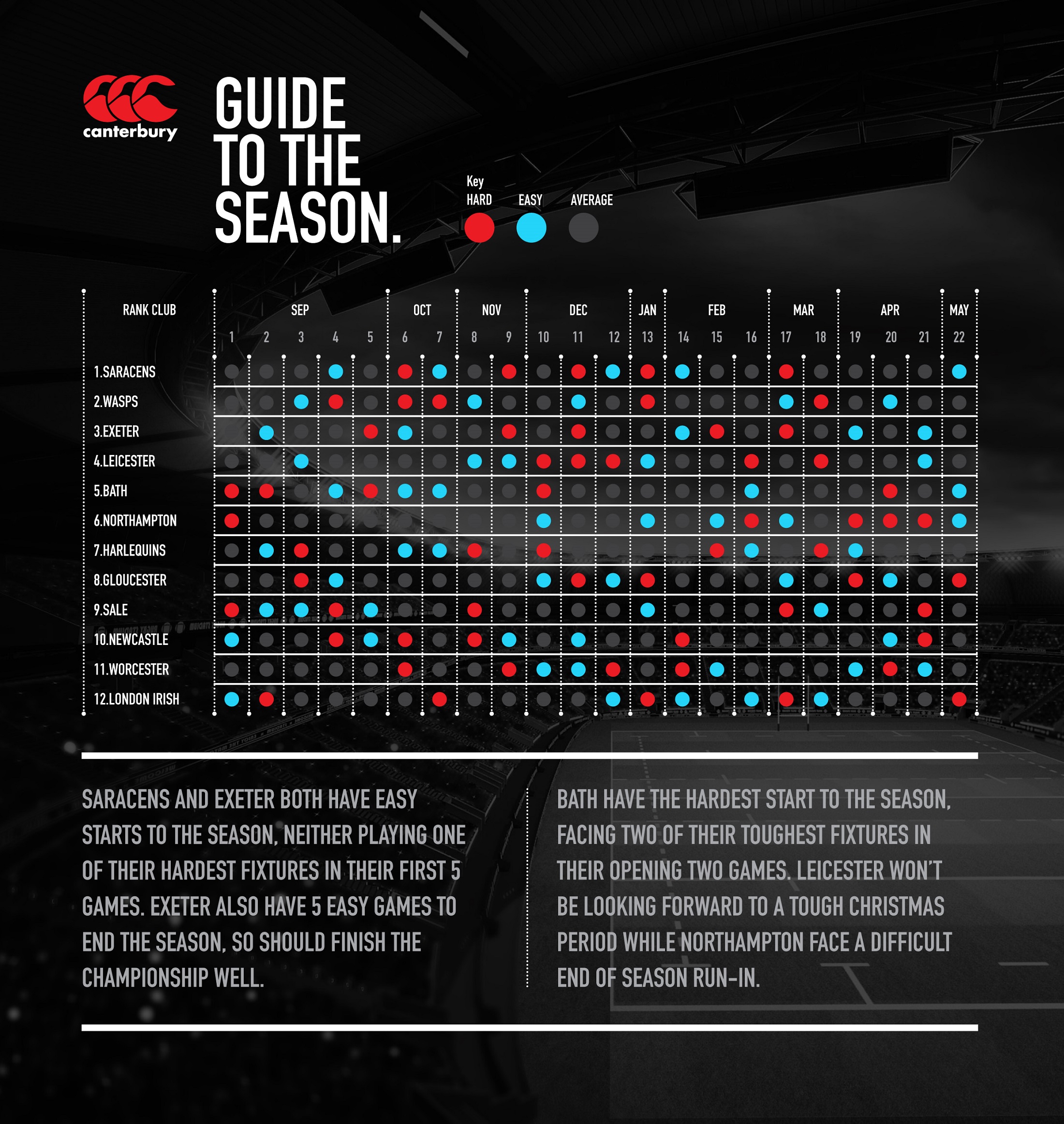 First Game of the Season

History shows that the first game of the season favours some clubs more than others. By looking how each club has performed in all their opening Premiership fixtures, Canterbury have found that being a favourite for the league doesn’t mean you’re most likely to win your first game… 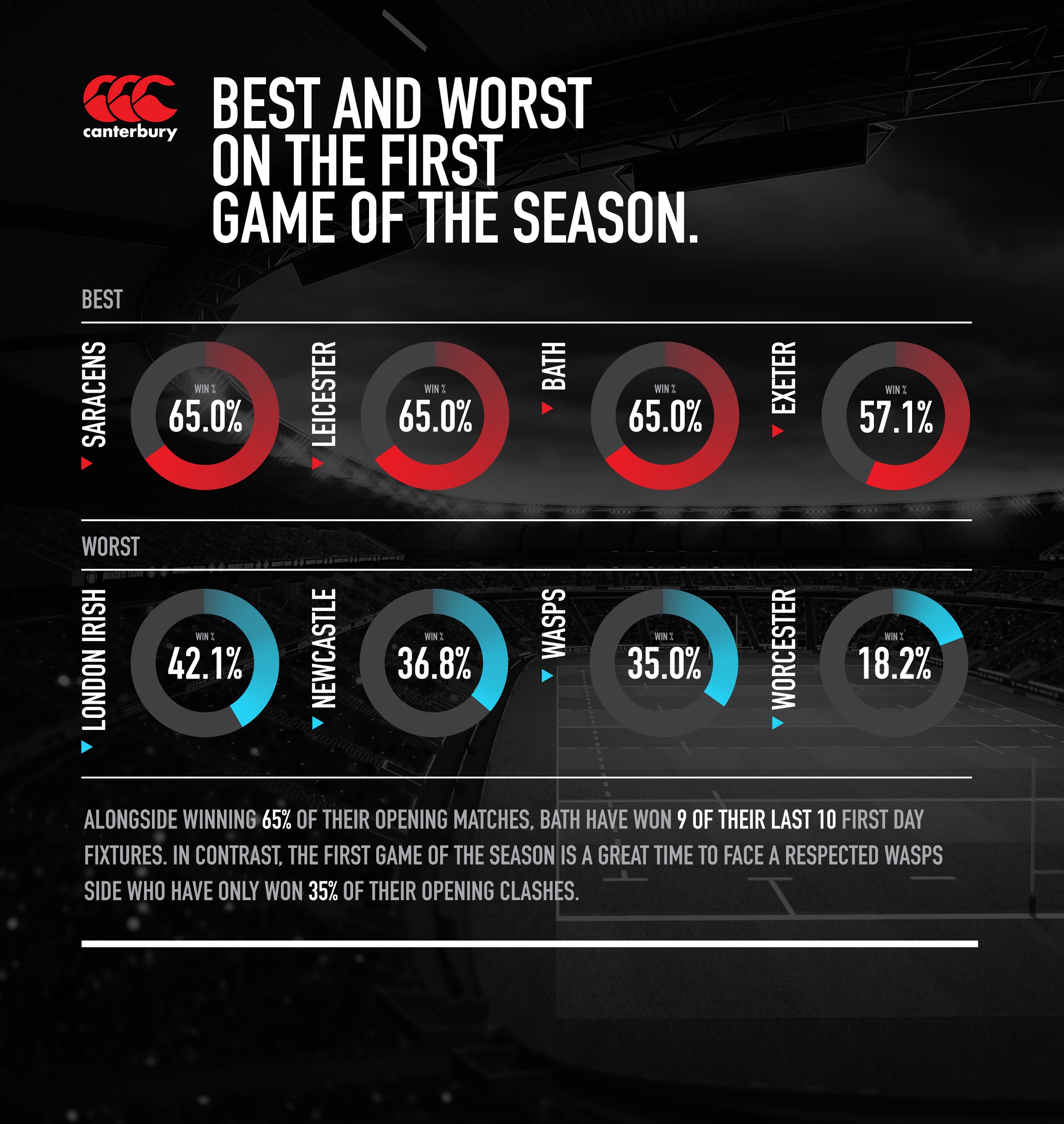 • Saracens, Leicester Tigers and Bath have all won 65% of their opening day fixtures in the professional era, with Saracens the most dominant in points scoring terms
• In complete contrast to this, Worcester Warriors have only won 2 opening day fixtures on 11 different outings, so will be hoping to prove history wrong away to Newcastle Falcons on Friday
• Bath have won 9 of their last 10 opening day fixtures, but a trip to Leicester Tigers on opening day – where they’ve only won 1 and drawn 2 of their 20 previous meetings – means that it’d be impressive for them to extend this
• Notably, title contenders Wasps have the second worst opening day win percentage out of all the clubs in the Premiership, providing hope for Sale Sharks when they clubs meet at the Ricoh Arena on Saturday

Although winning the opening fixture is important, getting off to a good start across your opening few games is crucial. Canterbury found that history provides hope for some fans, while others might want to remain in hiding for the first few games of the season: 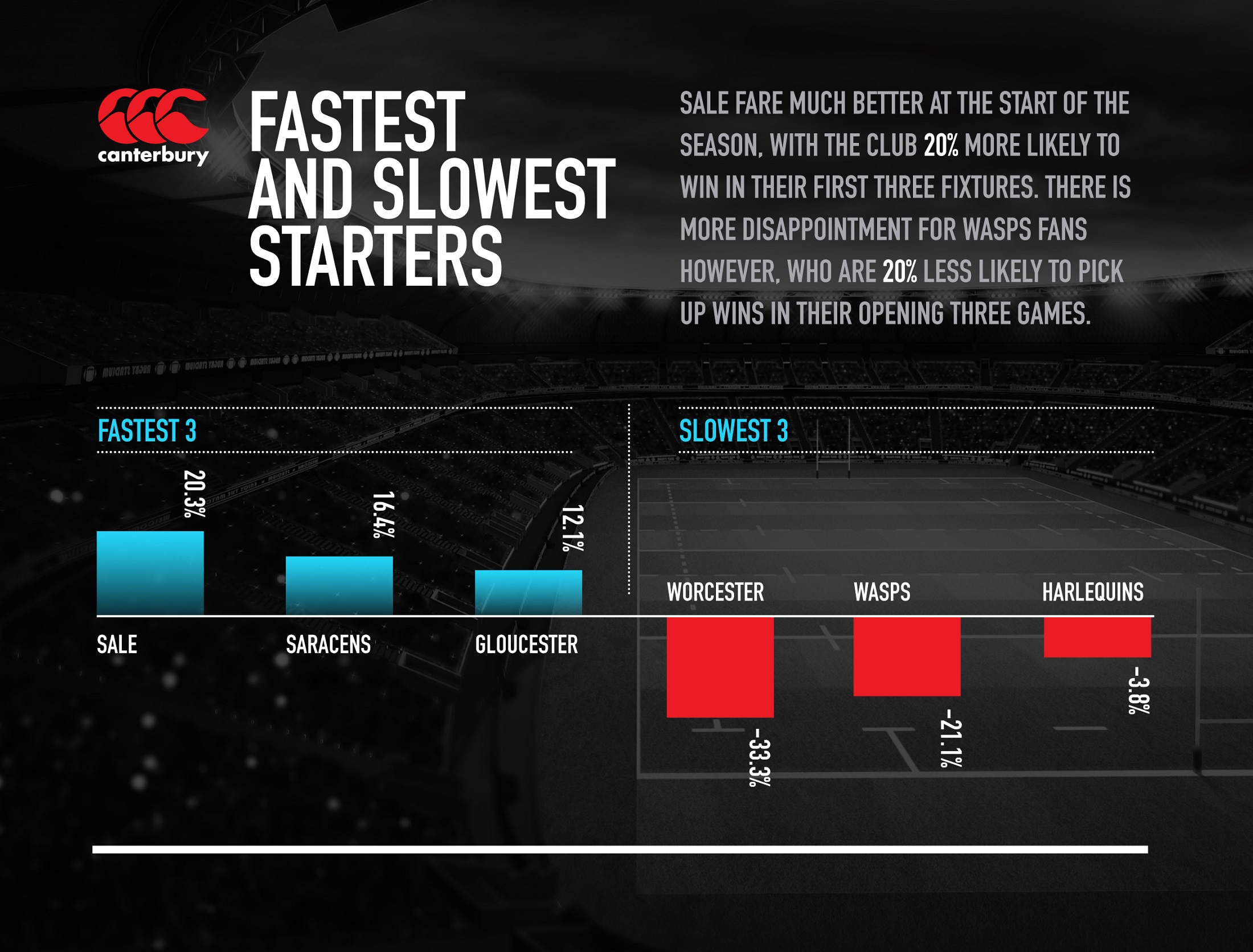 We all know that playing on home soil in front of a partisan crowd provides a huge boost to the home clubs. But is this true for every side in rugby’s top flight? While every team does enjoy a slight home advantage, which clubs really make it count, and who struggles under the pressure of an expectant crowd? 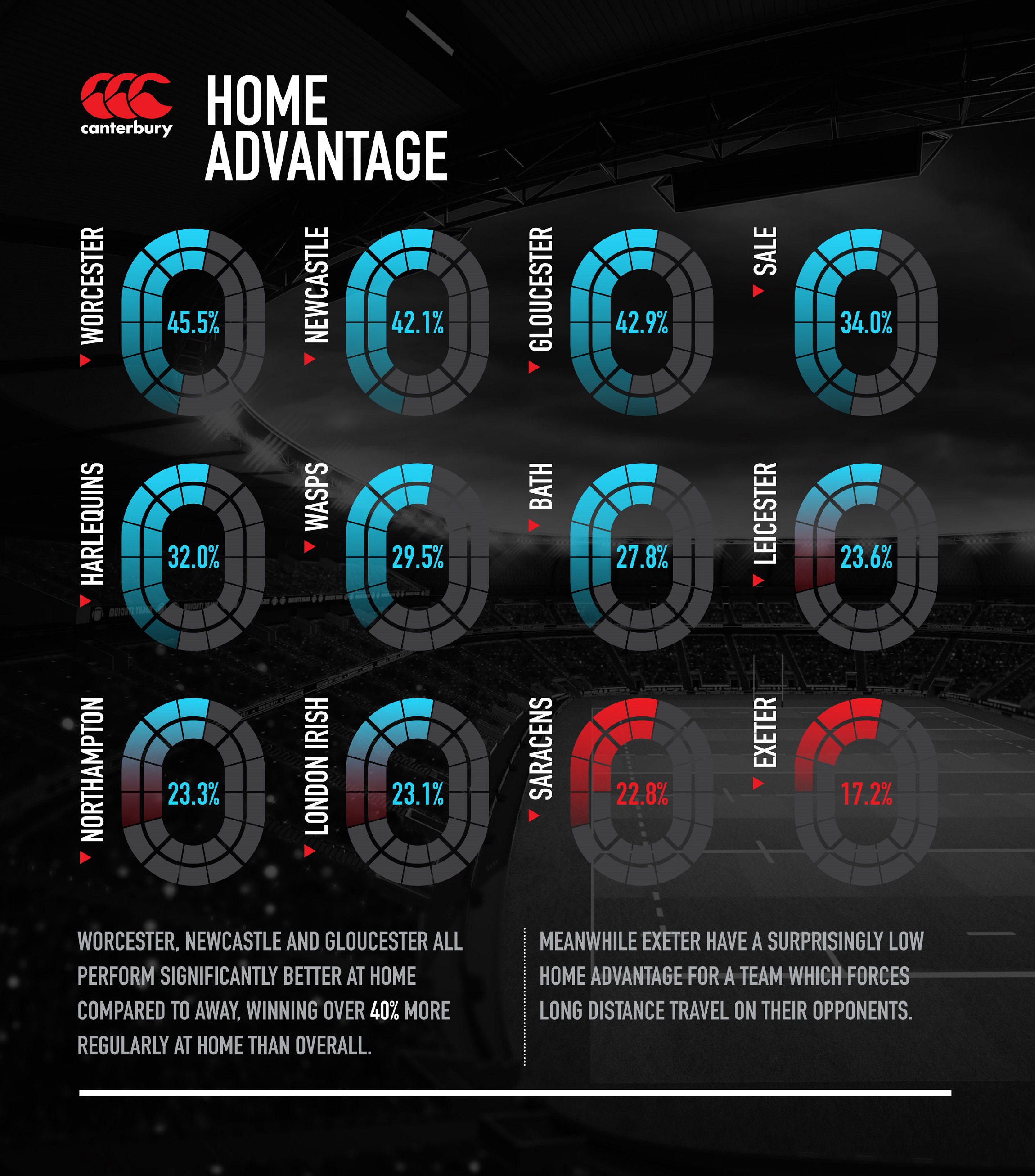 Fixtures to plot in your diary

For fans around the country hoping to watch the games with the most action, Canterbury

For fans around the country hoping to watch the games with the most action, Canterbury have put together a week-by-week guide which highlights what is likely to be the highest scoring match of each round. These are the fixtures to plot in your diary, whether you’re a club fan or are just a rugby neutral who likes to see tries being scored! 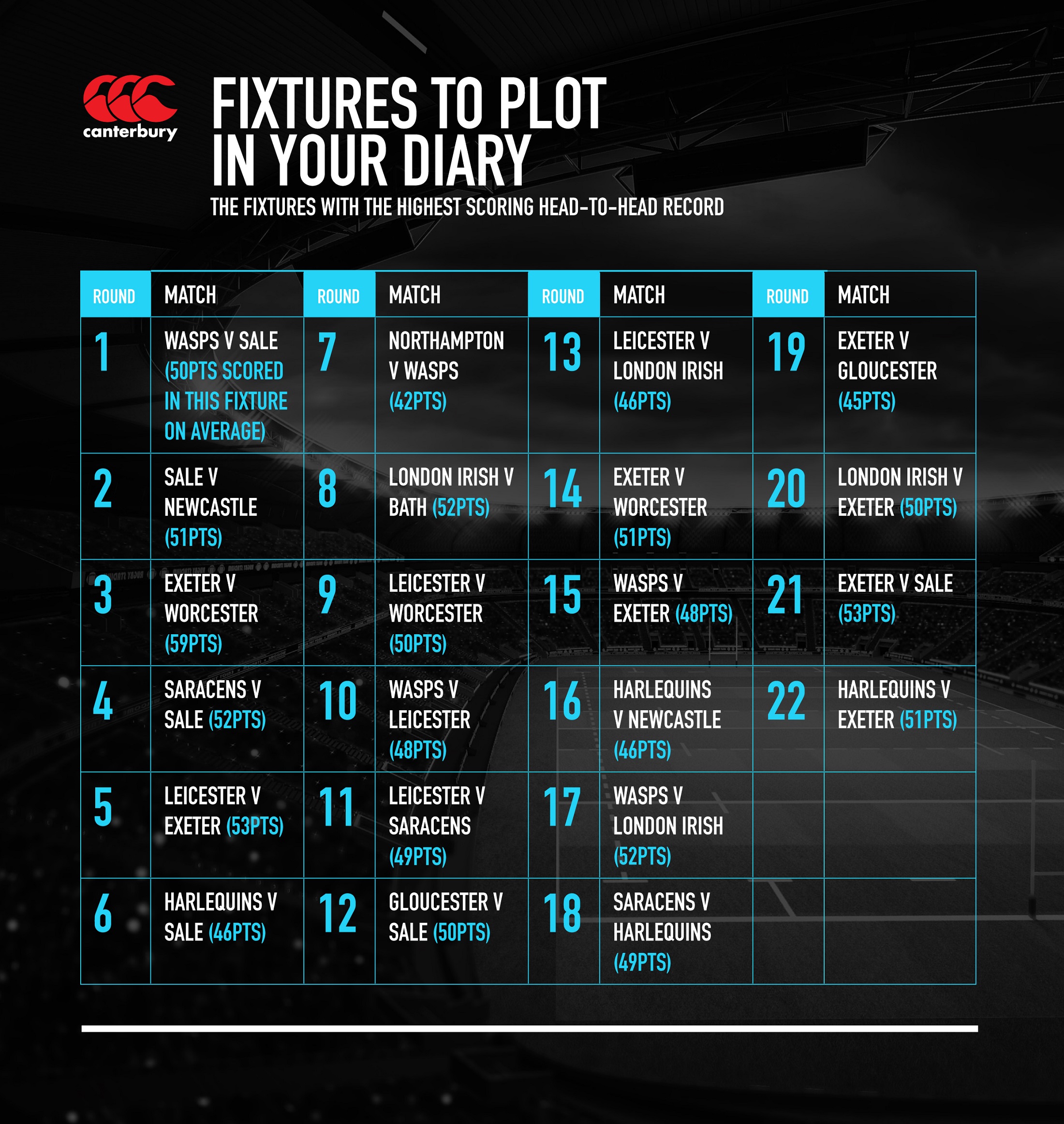 For a more information on the guide to the season, please visit https://www.canterbury.com/clubhouse. All visuals are available on request by contacting Will.Mitchell@synergy.global or Adrien.Raynaud@synergy.global