England take on Scotland at Twickenham in their penultimate game of the 2017 Six Nations next Saturday, and Sir Clive Woodward has suggested they will have to improve from their opening three performances to win.

“After three middling performances in the Six Nations so far, England are due a ‘big one.'” wrote Woodward for the Dailly Mail.

“I’m confident Eddie Jones and his team will deliver something pretty special next Saturday to beat a resurgent Scotland at Twickenham and set up a tilt at a second successive Grand Slam.”

He added. “England have not really fired properly in this Championship yet.

“They played well at key moments to dig themselves out of a hole against France and Wales and that strange Italy game counted for very little in trying to assess the form and potential of this team.

“Now England really need to engage top gear because that is what will be required to deal with the Scots.”

The 2003 World Cup winning coach also took aim at George Ford, demanding more from the fly-half in the next two games.

“Some of the team, possibly the majority, will know they have not done themselves justice yet.

“They will be feeling slightly uneasy about that with the Lions tour so close. 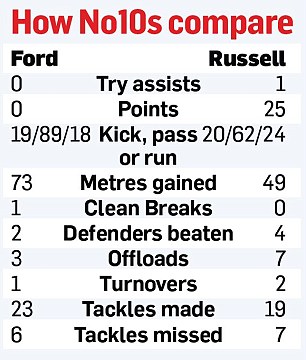 “Included in that category is probably George Ford, whose battle with Finn Russell provides a fascinating subplot to what could be a cracking game. This is probably the shootout for the reserve spot at 10 in the Lions squad.

Ford has not been at his best so far but is not playing badly. He is a dangerous attacking runner in his own right who is happy to run back into traffic and link with fast forwards on his shoulder.

“That is not England’s style at present but, rather like England, he will find a way of exploding into action against the Scots.”

5 standout performers Jones should call-up after this weekend