A student rugby club has been ‘indefinitely’ shut down after its members planned a miners’ strike-themed party.

Members of the club have been suspended indefinitely and denied from all fixtures, training facilities, and future socials until further notice.

Members of Trevelyan College Rugby Club at Durham University were instructed to dress as “m-i-n-e-r-s”, with instructions for “flat caps, filth and a general disregard for personal safety”. 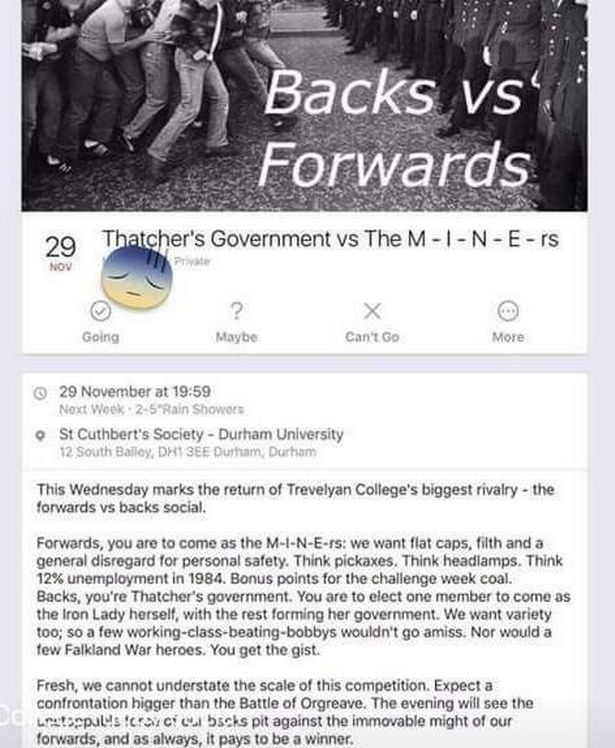 In the now-cancelled “forwards vs backs event” the “backs” were told to dress as members of Margaret Thatcher’s Conservative Government, including “a few working-class-beating-bobbys” and “a few Falklands war heroes”.

Durham University released a statement condemning the event, which was quickly cancelled. The university has now announced that all the club’s activities, on and off the field, have been cancelled.

In an updated statement on Monday, Owen Adams, pro-vice-chancellor for colleges and student experience, said: “A programme of education, concerning the North East region’s proud traditions, and the national importance of the endeavours and sacrifices of those working in the Durham coalfields, is to be put in place for the benefit not only of those students directly involved but also of the wider sporting fraternities and student communities.

“Specific apologies from the Rugby Club to the Durham Miners’ Association and other representative bodies will follow.”

The rugby club’s associated darts team will also no longer be allowed to play.

The college’s planned ‘sportsman’s ball’ has also been cancelled, she said, due to the behaviour of the rugby team as well as other incidents involving sports societies.