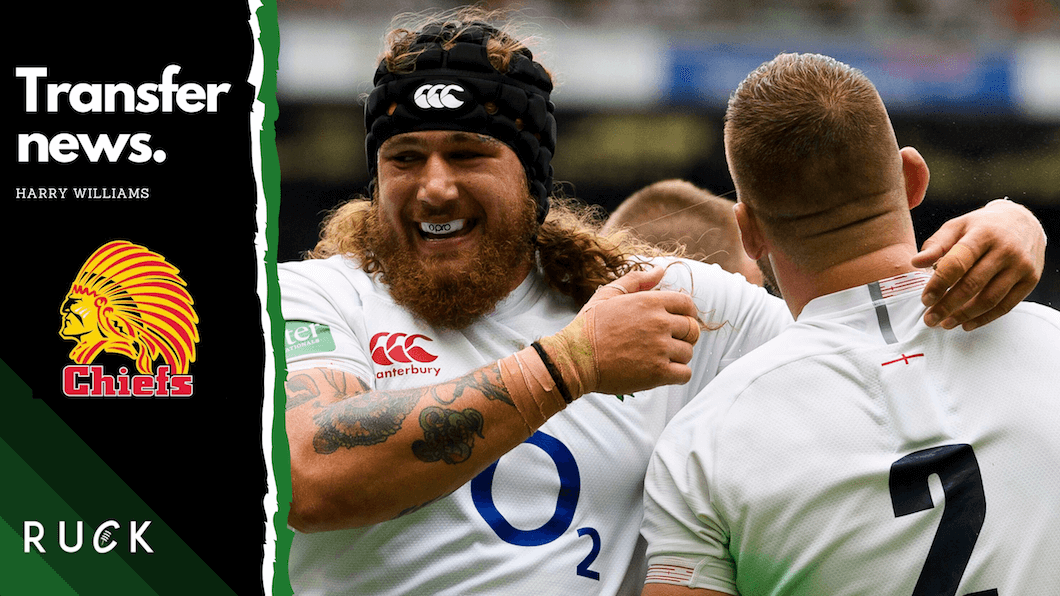 Exeter Chiefs prop Harry Williams admits it was an ‘easy decision’ to put pen to paper on a new long-term deal with the current Gallagher Premiership leaders.

The England international has been at Sandy Park since 2015, joining the Devon club from Championship outfit Jersey Reds, and he has since established himself as an integral part of the much-vaunted Chiefs pack of forwards. The deal is thought to be in the region of £250,000 per season.

Part of the club’s Premiership-winning side of 2017, the 28-year-old tight-head has made just shy of 100 first-team appearances, scoring ten tries in the process.

News that the London-born forward will be prolonging his stay in the Westcountry will be welcomed by Chiefs supporters, who have been keen to find out more of Rob Baxter’s squad make-up for next season and beyond.

“It was an easy decision to make,” said Williams. “I’ve been here five years now and I’m very happy down here. Ever since I came to the club, it’s been awesome and I’ve loved pretty much every minute of it.

“I knew when I left Jersey that I was moving to an ambitious club, who would bring the best out of me and challenge me in a testing environment. That’s been the case from day one, but I still feel there is still more to come from me.”

With the Chiefs flying high for a number of years in the Premiership, as well as establishing themselves more prominently on the European stage, Williams believes a bright future lies ahead for him, his team-mates, and the club itself.

“I think for everyone at the club, we’re not happy sitting on our laurels and just accepting that we’re going do this and that,” added Williams. “As a professional, you always feel you can kick on and get more out of yourselves. Here at Exeter, everything is laid out for us and the club give us a great foundation from which to build.

“I’ll admit, when I first came here I didn’t really have any so-called affiliation with the club or the city. Now, it’s pretty much home for me and I’m looking forward to what the future holds.”Prop Harry Williams has won 18 Test caps for England

Since being at the Chiefs, Williams has gone on to become one of several England internationals the club now boast, winning 18 Test caps under Head Coach Eddie Jones.

Many thought Williams would be part of Jones’ plans for last year’s Rugby World Cup in Japan, but he was omitted from the tournament’s final 31-man squad. This season, he has also been included in England’s training squad for the recent Six Nations Championship, but was not called upon to feature in any of the games.

England’s loss, however, has been Exeter’s gain as Williams has helped steer his club to the top of the Premiership and the last eight of the Heineken Champions Cup this season.

“I don’t tend to dwell too much on the negatives, I much prefer to look at the positives,” continued Williams. “If I’m playing well for Exeter, then other things hopefully follow. As I said earlier, I like to test myself because that’s often what brings the best out in you.”

As transfers continue to be completed ahead of the 2020/21 Premiership season, there are a number of moves still on the agenda…

The Italy legend could continue his professional career in 2020/21 after London Irish offered him a lucrative one-year contract, according to RUCK sources.

With survival confirmed following Saracens relegation, London Irish have been on hunt for a marquee signing ahead of their move to Brentford FC’s new Community Stadium. It’s projected to have a capacity of 17,250.

This move could definitely still happen.

The Leicester Tigers ace was told he’d have to accept a £100,000-a-year pay-cut to remain at Welford Road, but the Newcastle Falcons are lining up a move for the England flier.

Newcastle Director of Rugby Dean Richards has reportedly made contact with May to see if he’d be interested in a move to Kingston Park.

Although, it’s understood he rather remain in the Midlands, it’s a move that could definitely still happen.

The Premiership side have emerged as favourites to tempt British Lions back row away from the Dragons.

The 25-year-old who is out of contract at the end of the season, helped Wales finish fourth at the World Cup. He has been attracting plenty of interest from the Premiership and France.

Moriarty, who plays at flanker and No.8, spent six years in the Premiership at Gloucester before joining the Dragons two years ago.

Exeter Chiefs, Northampton Saints and Bath have all taken a look at him along with big-spending French sides Lyon, Montpellier and Toulon.

No sign of this being confirmed but he has reportedly “agreed a deal” to return to boyhood club Warriors.

The 27-year-old headed to Gloucester having emerged through the academy at Sixways, making 55 appearances before leaving as a hot prospect at the age of 20.Custom HTML

The West Country side are thought to be looking to sign Saracens’ Alex Lozowski who could be the exactly the sort of player needed to come in and unlock the Bath backline.

While Lozowski has played much of his recent rugby at centre he is also an experienced 10 and would make an able back-up option at fly-half however Bath are reported to be in a battle with Sale Sharks to land the versatile England international.

He will definetly leave Sarries, it’s just a matter of where he ends up.