The Springboks 24-25 loss to the All Blacks wasn’t enough for South Africa as they slip down the World Rugby Rankings for a second consecutive week.

Australia claimed second place in the Rugby Championship and third place in the World Rugby Rankings, climbing above Ireland and South Africa, after signing off with a 37-20 win over bottom-of-the-table Argentina in Mendoza.

Michael Cheika’s side are now on 85.59 points, after a gain of 0.93 of a point, two-tenths more than Ireland and a fraction over half a point more than the Springboks.

New Zealand marginally increased their cushion at the top of the rankings.

The All Blacks came up against a Springboks side unrecognisable from the one that shipped 57 unanswered points in Albany last month, but they held their nerve to win through by 25-24, earning 0.31 of a rating point and boost their overall tally to 95.52, giving them a 5.38-point advantage over England.

Los Pumas stay in 10th place in the rankings but with only a 3.14-point cushion over nearest rivals Japan. 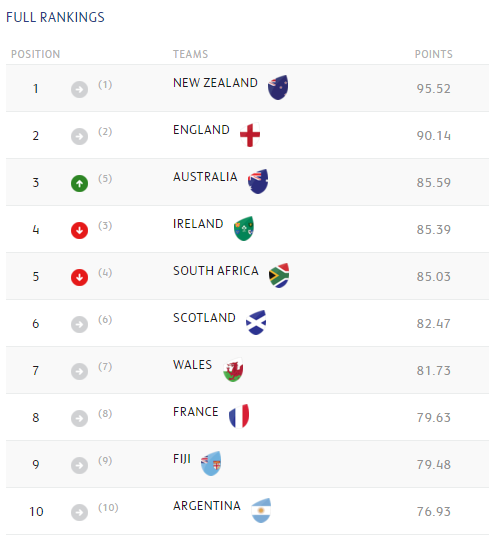