World Rugby U20s: England get off to winning start, Scotland clash with New Zealand - Ruck
Skip to content
U20 Championship

Reigning Under 20’s champions England begun their title defence in style as they thrashed Samoa 74-17, scoring 12 tries in the process as they kicked off the competition in Georgia.

It was the men in white who got the first try of the Championship when Sarries versatile back Ali Crossdale crossed for the opening try.

Two quickfire scores followed from captain Zach Mercer and Max Malins to put England in total control before scrum-half Alex Mitchell stretched out to dot down their fourth soon after, securing the bonus-point, 22-0.

Sarries centre Dominic Morris burst through the Samoan defence with ease for England’s fifth just before the half-hour mark before Mercer grabbed his second.

Harlequins wing Gabriel Ibitoye then picked up from the back of the RUCK for England’s seventh and made it 43-3 on the stroke of half-time.

#WorldRugbyU20s | England have come out the blocks firing in their opener against Samoa. Watch the 2nd half LIVE: https://t.co/MeJjP8TLSv pic.twitter.com/G0DxrYuz2q

Exeter Chiefs forward Marcus Street added England’s eighth soon after the restart before Crossgate grabbed his second with a neat finish in the corner, 53-3

Losi Filipo then got over for Samoa’s first try of the championship but a try from prop Ciaran Knight and a second for Morris firmly established the men in whites dominance.

Impressive winger Ibitoye then completed the rout with his second and England’s of the afternoon but there was still time for Filipo to grab his second for Samoa. 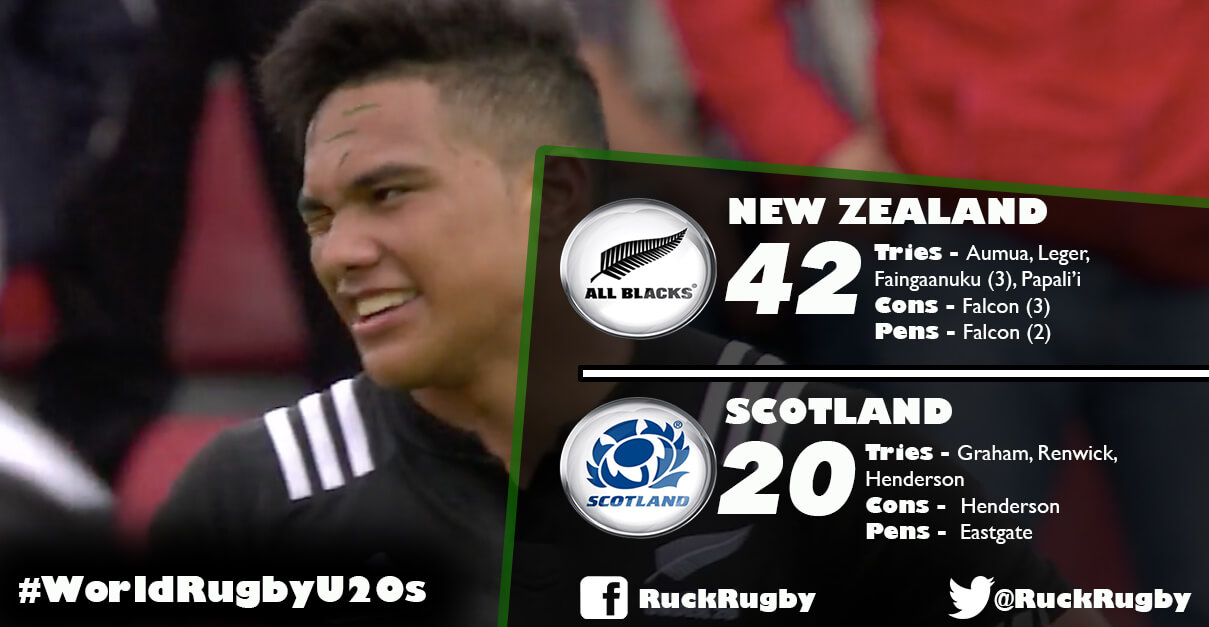 Meanwhile, Tima Faingaanuku scored a hat-trick as New Zealand got off to the best possible start, overcoming Scotland 42-20 in a competitive clash at the AIA Arena in Kutaisi.

The All Blacks got off to a dream start when left wing Faingaanuku finished in the corner with Tiaan Falcon landing a brilliant touchline conversion.

Scotland hooker Fraser Renwick reduced the deficit with an unconverted try soon after but opposite number, Asafo Aumua, joined him in crossing the whitewash a couple of minutes later, 12-5.

Darcy Graham narrowed the gap once again to two points with his try but Faingaanuku crossed for his second before the break to put the Kiwi’s 19-10 in front.

Falcon and Scotland fly-half Connor Eastgate traded penalties early in the second half before New Zealand secured the bonus-point when Dalton Papali’i dotted down, 27-13.