Following wins against Ireland and Scotland in the quarter-finals, the attention has now moved to Argentina and Australia’s clash at Twickenham this afternoon, which is arguably the biggest game of the Rugby World Cup so far.

Stakes going into the clash are high as the teams find themselves in a one-on-one battle reach the Final against the All Blacks next Saturday with the loser going on to play for third place against the Springboks next Friday night.

Here are five key duels that we think could decide the outcome of the game: 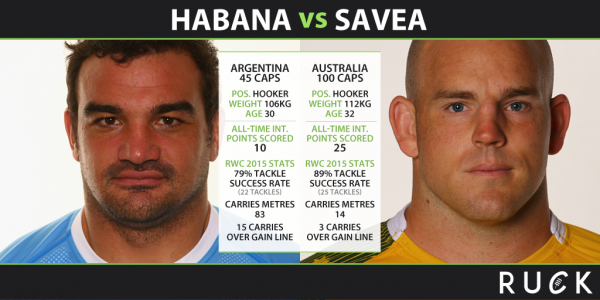 Two No 2s, two captains and potentially two very influential figures on today’s semi-final. Both hookers have been effective at the lineout during the Rugby World Cup, but the Pumas highly-rated scrum, which is led by their hard-hitting skipper Creevy could cause Australia and Moore serious problems. Putting their contrasts aside both men’s leadership qualities will be truly tested this afternoon, and it will be fascinating to see who comes out on top.

Both number 10s have had good RWC campaigns so far with just eight points separating them in the most points scored table. Sanchez, who has scored 74 points, has been in delightful form throughout the competition and much rests upon his shoulders against the Wallabies as the Pumas aim to reach their first ever final. Up against him is Australia’s match-winning hero against Scotland, Foley, who has scored 66 points so far. He was almost one of the villains after his kick was changed down and led to a Scottish try, but he showed nerves of steel to seal Australia’s place in the final four. These two could steal the show.

What an aerial battle of the fullbacks this promises to be as two of the finest number 15’s in world rugby in Tuculet and Folau go to war. The Pumas’ number 15 has made six clean breaks during the RWC, but he will need to be at his best defensively as, if the Pumas fail to shackle Folau, he could potentially tear them apart out wide. The two without doubt both have the x-factor and it will be intriguing to see which of the pair performs better.

Giteau is highly influential for Australia but comes up against a formidable opponent in Hernandez, who like the Wallaby centre has an excellent kicking game. If you give Giteau scope, he can do some damage but Hernandez will be well aware of that following their time playing together for Toulon. The Pumas centre, who was prominent in their third place finish at the 2007 installment of the competition will look to ensure the Pumas remain organised in the midfield, somewhat the master of the chaos in that part of the field. Both these players could very much play key roles in who wins and who loses

Pocock is world class at the breakdown. He is quick and with such a massive chest and upper body is so difficult to shift once he gets over the ball, which is why he has made a staggering ten turnovers during the RWC so far. The Pumas veteran back-row Senatore will need to call upon all of his experience to deal with the Wallaby and if he can keep him quiet Argentina’s chances of winning the game will significantly improve.