Lees man of the match display as Exeter overcame Wasps at the Ricoh on Saturday evening was nothing short exceptional. The Australian back-rower, who also touched down a try in the game, signed for Exeter from Championship side London Welsh in April 2014 and has gone from strength to strength in recent times with a new found aggression, particularly so far this season.

TEAM OF THE WEEK: EXETER CHIEFS

Sixty-eight points were scored while Thomas Waldrom scored Exeter’s first-ever Premiership hat-trick as Exeter Chiefs edged out Wasps 41-27 in one of the games of the season at the Ricoh Arena, the bonus point win seeing Rob Baxter’s men move to the top of the Premiership table. They were simply excellent and are now definitely genuine title contenders.

An exquisite outside of the right boot chip over the top by Danny Cipriani for Sale found his old schoolmate Nev Edwards before the winger sped away from two Gloucester defenders to dive over. The Sharks lost the match in the end, but this try was one to remember!

There were many heroes during round 6. However, Luther Burrell, who has gone through his fair share of adversity in 2015, put in another gutsy performance as Saints edged past Bath. His tackling was robust, his running was hard, and his try was taken well as he intercepted George Ford’s wayward pass. An England recall looks inevitable.

Worcester Warriors were left to reflect on what might have been after Donncha O’Callaghan’s red card played its part as Leicester Tigers secured a dramatic 29-20 bonus-point win at Sixways. Minutes after the restart O’Callaghan was penalised after a dangerous-looking driving maul from Leicester, leaving the former Ireland lock to trudge back down the tunnel for an early bath. It ultimately cost them. 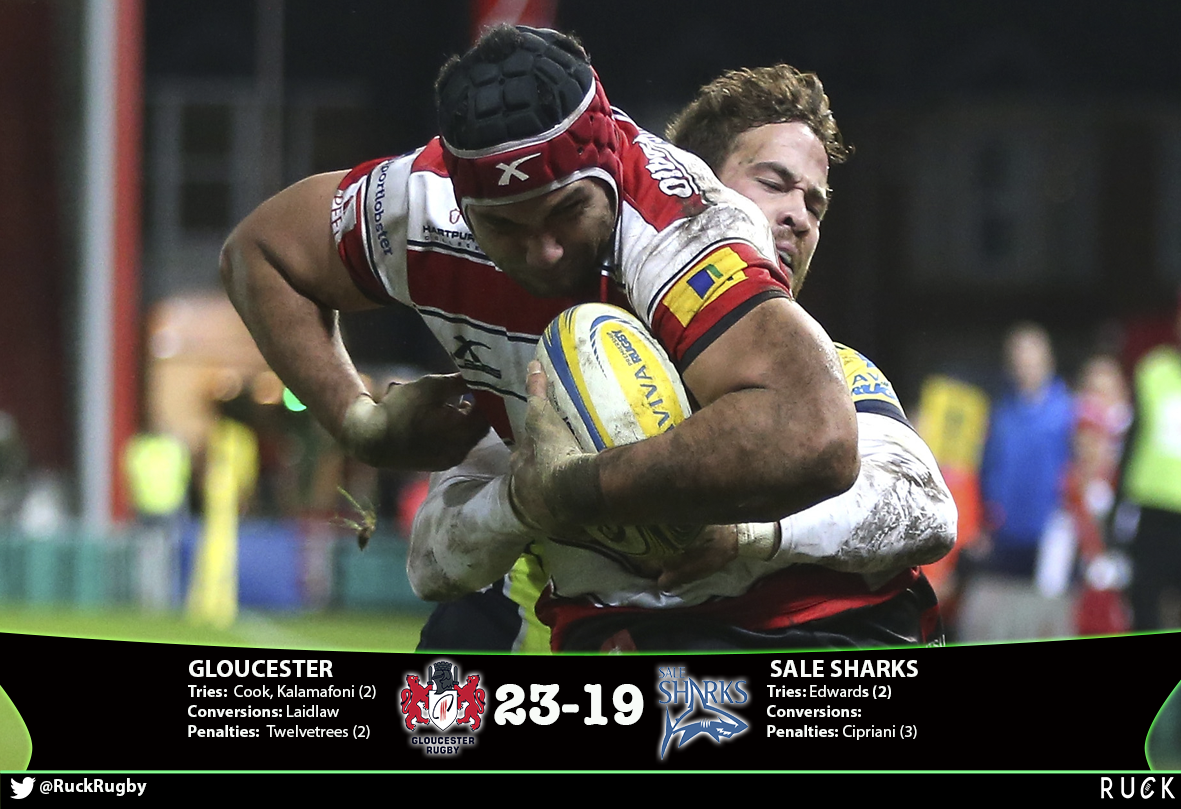 Gloucester took just two minutes to score a try after having previously gone 180 minutes without touching down as they overcame Sale in a tight and tense Aviva Premiership encounter on Friday night.

Sale have now lost eight consecutive away games but do head back to the North-West with a well-deserved losing bonus-point while the Cherry and Whites continue their outstanding home record, which has seen them only lose once at Kingsholm in 2015, to move up to sixth in the division.

Gloucester had narrowly led 11-8 at half-time following a tight and tense opening 40. Rob Cook’s try and two penalties from Billy Twelvetrees meant despite a frustrating first half in many ways for the hosts;  they could at least be happy that their side took a narrow lead into the break.

The Sharks, despite being behind, had bounced back from their subdued display against Newcastle a week prior and were well in the game at the interval thanks to a delightful chip from Danny Cipriani to Nev Edwards, who ran into score, before the number 10 completed the Sharks opening 40 tally with a penalty.

After the break, following a yellow card to Gloucester’s Richard Hibbard, Sale captured the lead as Cipriani shot over a penalty goal before Edwards raced in for his second try. However, two tries in four minutes from Sione Kalamafoni with the latter converted by Greig Laidlaw ensured Gloucester crept home to what could be a critical victory

Cipriani slotted another penalty to set up a grandstand finish, but the Cherry and Whites defended fantastically to hang on. The performance though from Sale though was much improved, and you expect that this sort of display is something they will look to build on in a few weeks time following the European break. 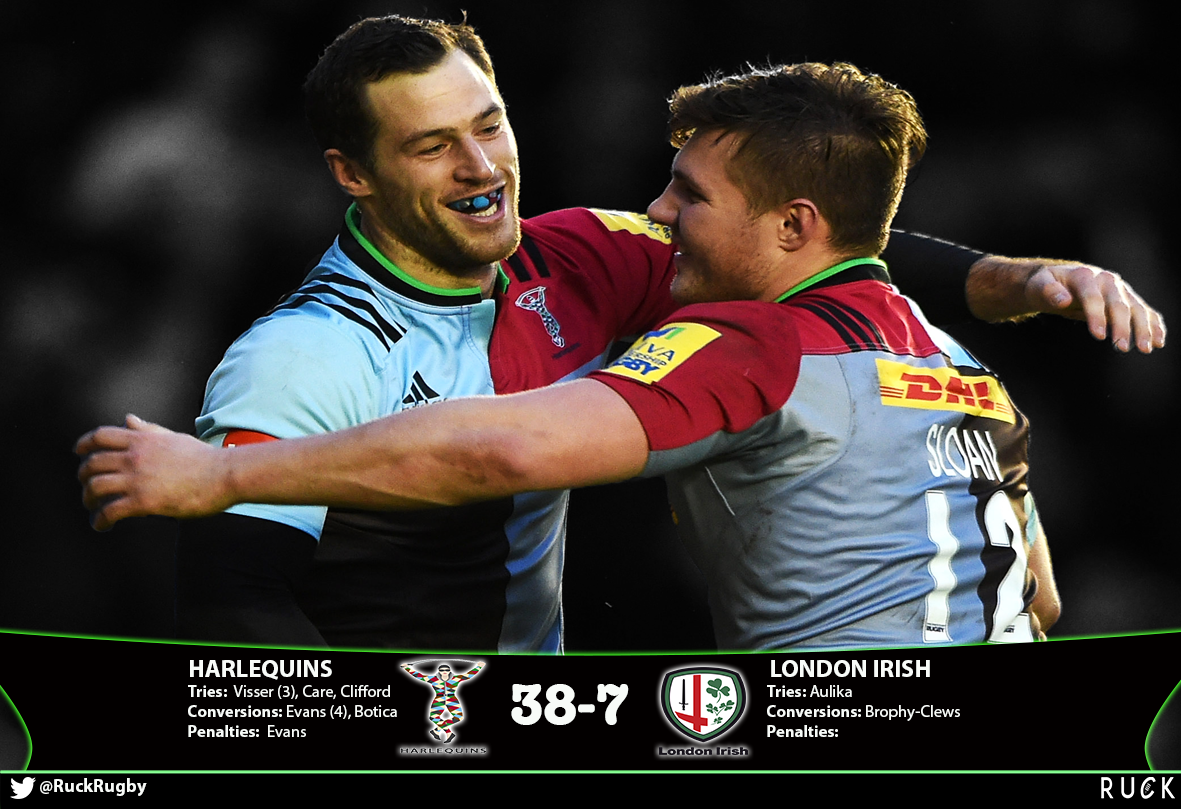 New England head coach Eddie Jones sorted out his visa issues and was at Twickenham Stoop as a number of England regulars impressed on Saturday, but it was Tim Visser who starred as the Scotland winger touched down a hat-trick for Harlequins as they recorded a comfortable 38-7 bonus-point victory again London Irish.

The Exiles have now lost all six of their league games so far this season and as yet have not managed to tally a single league point while this victory continues Quins rejuvenated start to the campaign with them winning four of their opening six games.

Nick Evans notched an early penalty before converting Visser’s first on 32 minutes for a 10-0 half-time lead. Danny Care then stretched that lead to 15 points on 47 minutes before Visser got his second on the hour, Evans with the extras to make it 24-0 and put the result beyond doubt.

But there was more to come in the final quarter as Visser drove in for his third of the afternoon on 69 minutes and secure a try-scoring bonus point for the hosts.

Substitute Jack Clifford added a fifth try for Quins on 76 minutes, before a late consolation from Halani Aulika, Theo Brophy-Clews with the extras, completed the scoring. 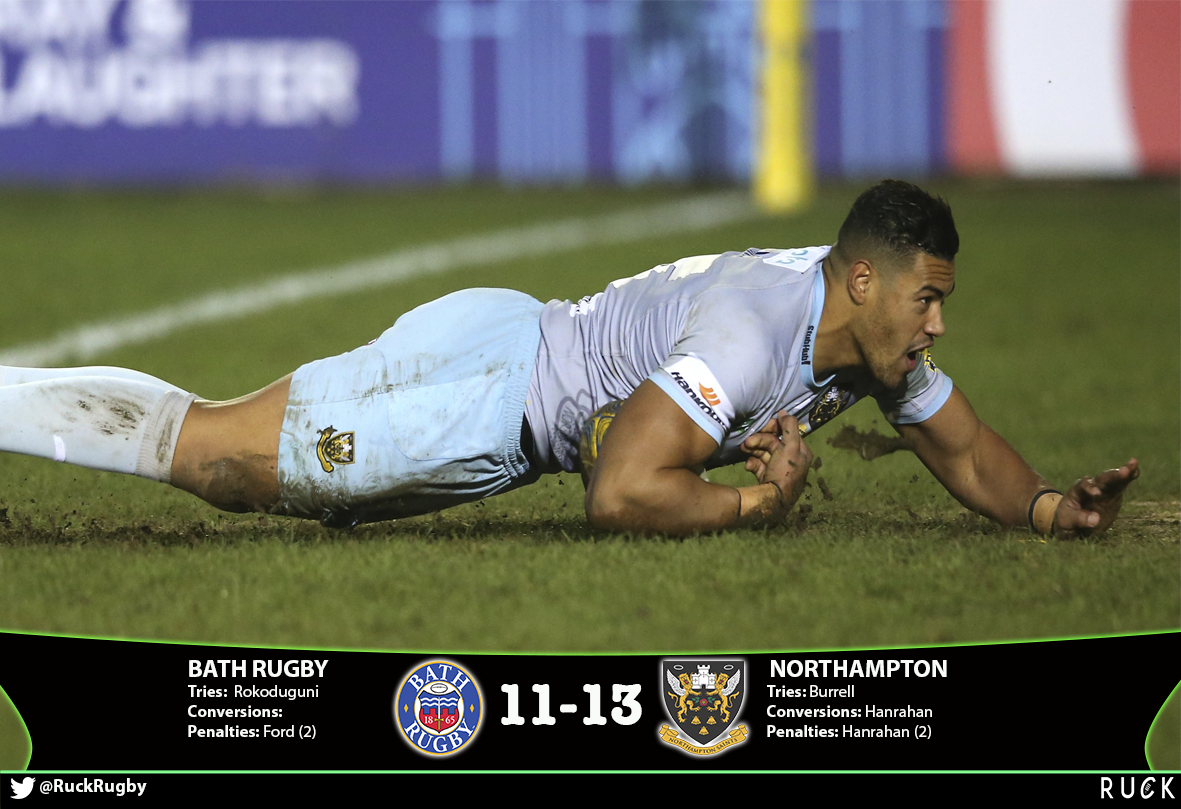 The edginess of the two sides, particularly in the first half was desperately disappointing for the crowd of over 13,000 with the first points eventually coming after 24 minutes when JJ Hanrahan slotted a penalty goal from just outside the 22.

Saints then gained a man advantage after their dominant scrum saw Bath prop Henry Thomas sent to the sin-bin five minutes before the break; however, they weren’t able to take immediate advantage, going into the break with their narrow three-point lead.

Ford slotted a penalty in front of the sticks to level the scores after the restart but Luther Burell’s try, converted by Hanrahan, recaptured the advantage for Saints, 3-10.

Bath hit back immediately with another three-pointer from Ford before Semesa Rokoduguni’s unconverted score gave the hosts a narrow one-point lead. 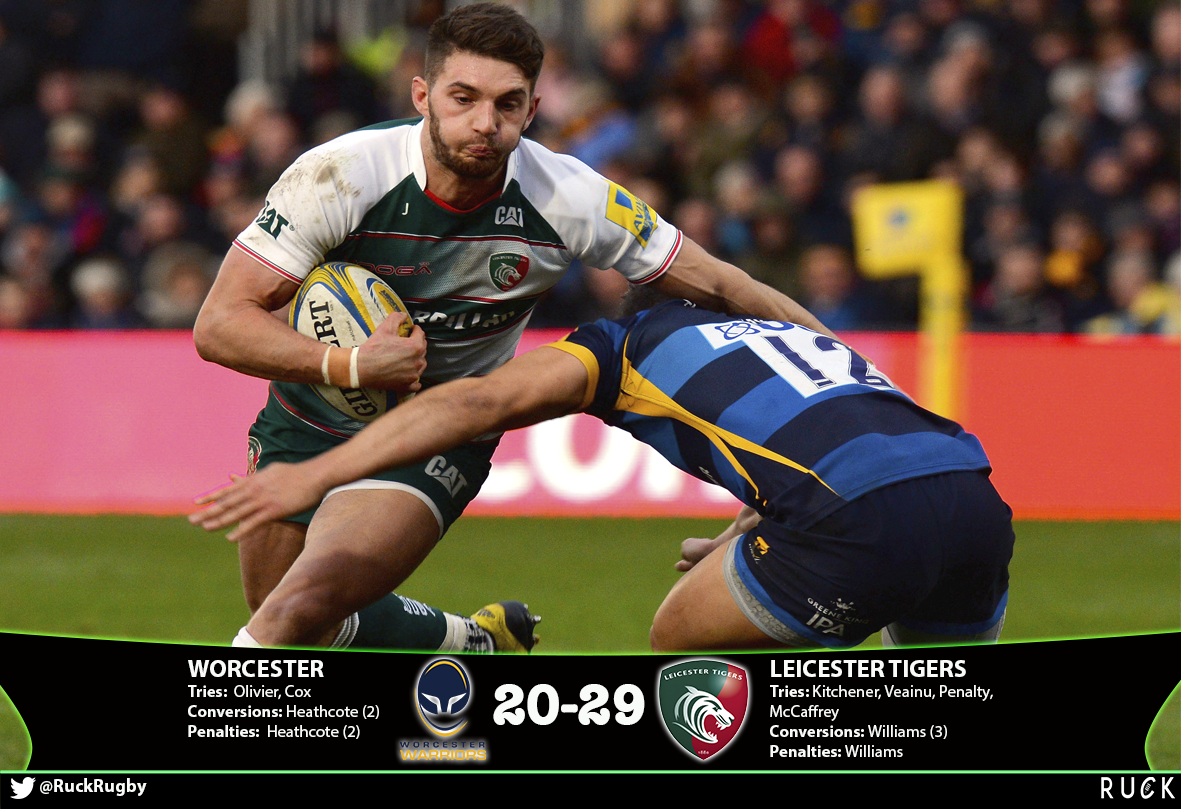 Worcester Warriors were left to reflect on what might have been after Donncha O’Callaghan’s red card played its part as Leicester Tigers secured a dramatic 29-20 bonus-point win at Sixways.

Worcester stormed into a 17-0 lead early on courtesy of tries from Wynand Olivier and Matt Cox, both converted by Tom Heathcote, on top of his earlier penalty.

But Graham Kitchener’s try, converted by Owen Williams, cut the gap to ten points at half time.

O’Callaghan was dismissed soon after the restart and Telusa Veainu took full advantage, scoring within five minutes, but Heathcote put Warriors eight points up with a penalty as the final quarter approached.

However, Tigers had the final say, a penalty try plus a late effort from Lachlan McCaffrey, Williams with the two each time, handing the visitors a remarkable win, after the Welsh fly half’s ultimately crucial penalty with 12 minutes to play. 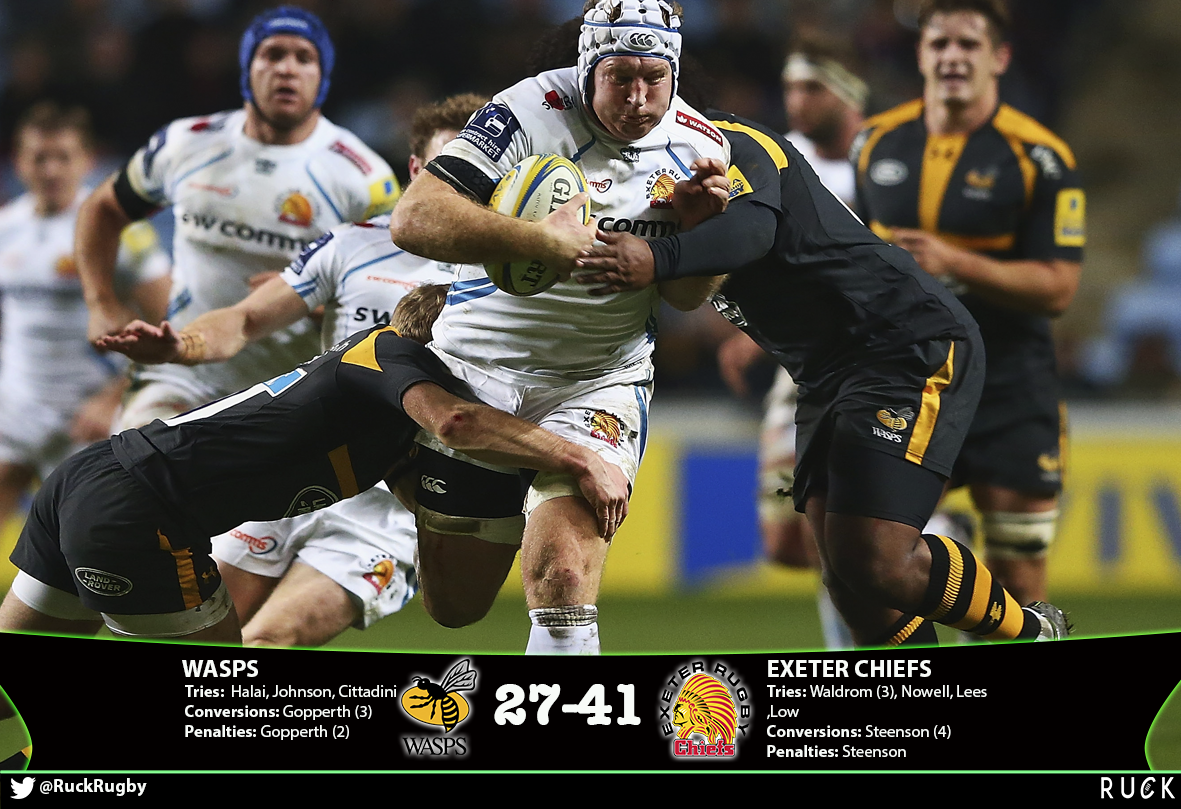 Sixty-eight points were scored while Thomas Waldrom scored Exeter’s first-ever Premiership hat-trick as Exeter Chiefs edged out Wasps 41-27 in one of the games of the season at the Ricoh Arena, the bonus-point win seeing Rob Baxter’s men move to the top of the Premiership table.

Gareth Steenson kicked off the scoring with an early penalty before Waldrom stormed over, Jack Nowell and Mitch Lees with further tries, both converted by Steenson, before Waldrom went in again to secure a try-scoring bonus point within a stunning 23-minute spell.

Two Jimmy Gopperth penalties were all Wasps had to show for their first-half efforts, until Frank Halai scored on half-time, Gopperth with the goal, to make it 13-27 at the interval.

Wasps struck back soon after the restart with Ashley Johnson, and Matt Mullan tries, plus two Gopperth goals, making it 27-all, but Waldrom completed his hat-trick ahead of a Moray Low try on 71 minutes, Steenson kicking his third and fourth conversions, to finally pull the visitors clear. 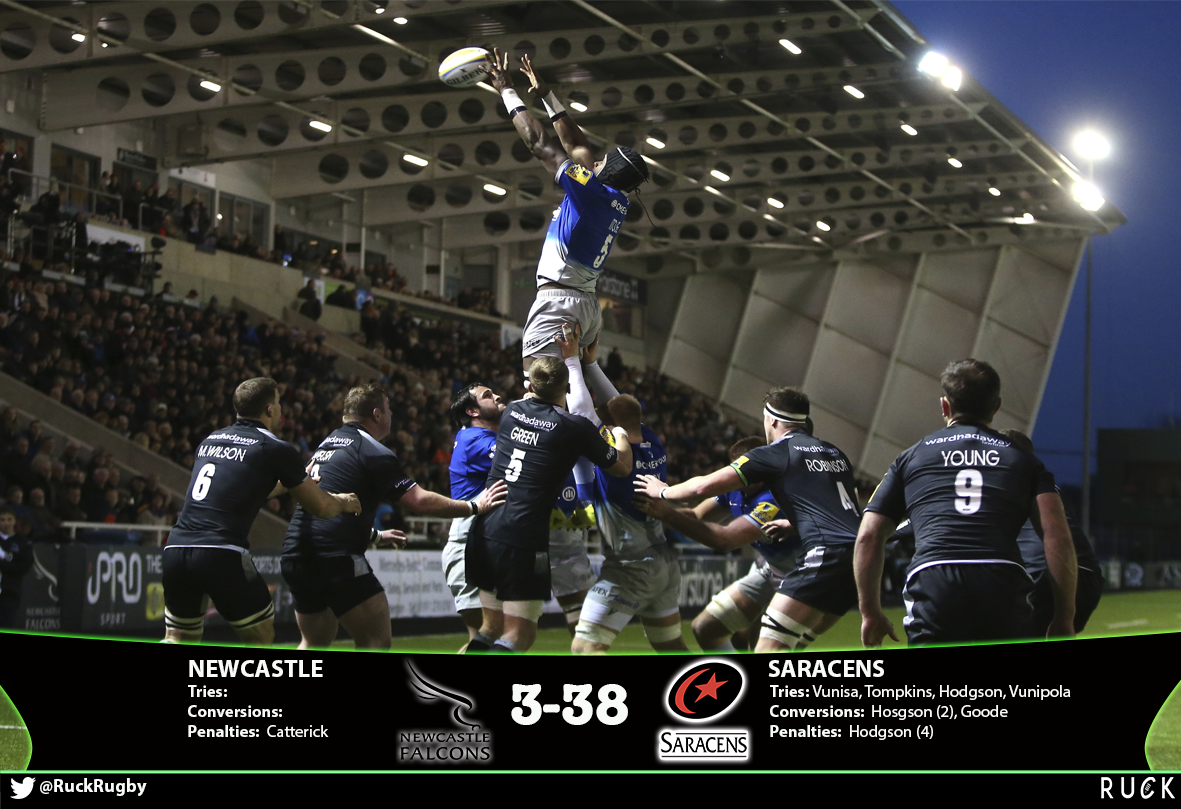 Charlie Hodgson scored 21 points in a masterful performance as Saracens kept up their 100 percent Premiership record this season with a hard-earned 38-3 bonus-point win over Newcastle Falcons at Kingston Park.

Sarries led 13-3 at half time after a Samu Vunisa try, plus a conversion and two penalties from Charlie Hodgson had cancelled out a Tom Catterick three-pointer for the hosts.

But the league leaders pulled clear in the second half with three further tries, added to by a conversion and a pair of penalties by RUCK Man of the Match Hodgson helping Sarries record a convincing win. Andy Goode also kicked a conversion to complete the visitors scoring.

Despite the 35-point losing margin, the Falcons were competitive for long periods, limiting the star-studded Fez Boys to just one try inside the opening hour.