England captain Chris Robshaw returned to the Harlequins starting XV as they blitzed past Bath in the Aviva Premiership thanks to an impressive second-half display.

Bath were in front at the interval thanks to Kyle Eastmond’s try, supported by eight points from the boot of George Ford. Nick Evans kept Quins in the match with four penalties, meaning the score at half time was 13-12 to the home side.

The second half saw the away side dominate the early stages. Evans put Quins in the lead with a penalty, before Danny Care went over for his side following some individual brilliance. Evans converted the try before adding two penalties to take the score to 13-28.

George Ford and Nick Evans exchanged penalty kicks to make it 16-31 to the away side, before try scorer Eastmond was sin-binned for Bath for a tackle without the use of arms.

It got worse for Bath when Dave Ward scored Quins’ second try of the game, following an offload from Tim Visser. Evans was in the groove and duly converted to extend Quins’ lead to 22 points.

The crowd at the Rec finally had something to cheer about, as Nick Auterac went over following a driving maul. Ford was unable to replicate Evans’ kicking form as he hit the upright.

Bath thought they were back in the game shortly after, only to see Leroy Houston’s try ruled out by the TMO.

The home side did, however, get another consolation try, with Semesa Rokoduguni going over in the corner. George Ford converted, but the game was over here, and Harlequins left the Rec with a 38-28 victory. 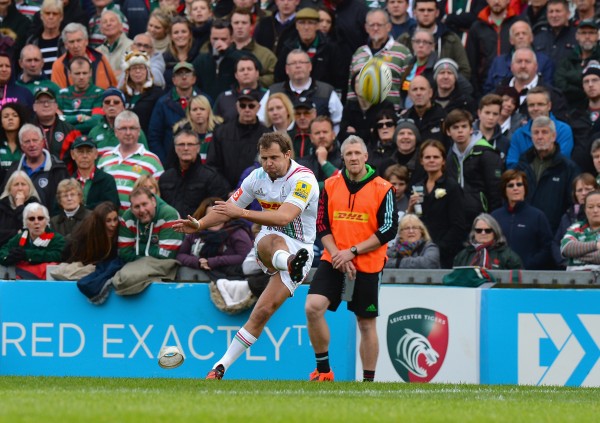 There were a few contenders for the MOTM award. Danny Care’s try alone put him in the mix, but it’s hard to look further than Nick Evans. The Quins fly-half contributed 28 points to his side’s victory this afternoon, and barely put a foot wrong.