England internationals Danny Care and Will Carling were two of many questioning the commentary of Sky Sports’ Stuart Barnes during the Lions win against the Crusaders. 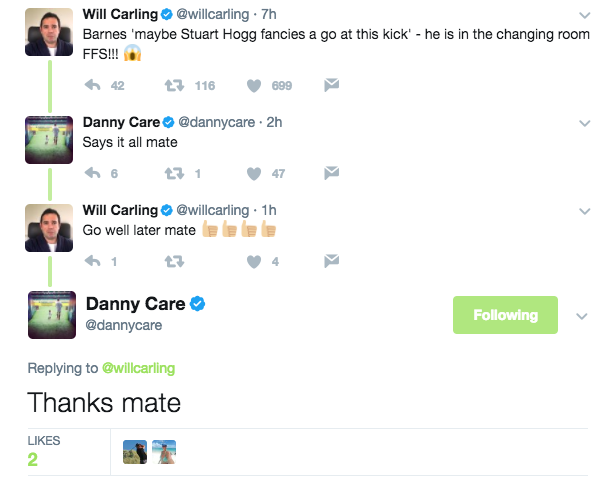 He had earlier been called out by the wife of Alun Wyn Jones.

Please can someone inform Stuart Barnes that it’s Jones and not Wyn Jones! @SkySportsRugby @WillGreenwood #imarriedajones

Stuart Barnes “I wonder if Stuart Hogg fancies this one”… he’s off the pitch you knob! #massivenause #LionsTour2017

It’s unbelievable in this hi-tech age that there’s no option to switch off Stuart Barnes on @SkySportsRugby! #LionsNZ2017

What was the score in the @lionsofficial game? I dozed off when Stuart Barnes started talking about his with Kieran Read #LionsNZ2017

Really disappointed with Stuart Barnes @SkySportsRugby commentary.
Three games into the tour and he hasn’t risen above mediocrity

I was using a jigsaw to cut metal during game, sounded better than Stuart Barnes on Sky!!

Oh Stuart Barnes it was Rory Best who threw that line out against the Blues not Ken Owens! @SkySportsRugby