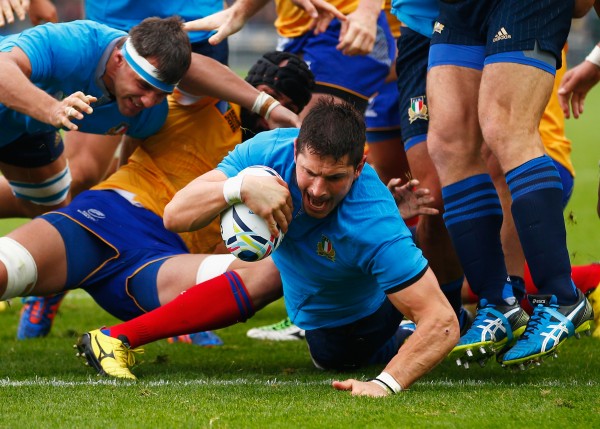 Jacques Brunel ended his reign with what looked to be a routine win, but another rallying Romania comeback made it a tight finish in the end.

After storming to comfortable 22-3 half-time lead, Italy threatened to run away with this one.

However, a Florin Vlaicu inspired Romania exploded into life in the final 14 minutes, scoring three unanswered tries to lose by just 10 points in the end.

Three Italian tries in the first 40 put them in firm control of this one, and they quickly added the bonus score after the break.

The Azzurri though in the end had to hang to seal their third place finish in Pool D, which means they qualify automatically for Japan 2019.

Florin Vlaicu continued where he left off against Canada, with a long range penalty to give Romania an early lead at Sandy Park.

An immediate response from Italy saw scrum-half Edoardo Gori almost score a brilliant individual try from a chip and chase, but the number nine gruelingly knocked the ball on at the crucial point of grounding.

The try did arrive on the 10-minute mark, as Italy moved the ball quickly through the hands for wing Leonardo Sarto to produce an easy finish from the overlap.

Tommaso Allan failed to add the extras, but the Azzurri moved ahead for the first time to make it 5-3.

Referee Romain Poite sent Johannes van Heerden to the bin for a “cynical infringement”, by knocking the ball out of Gori’s hands as he attempted to recycle.

Allan nailed the resultant penalty to increase the Italian lead to five. The fly half then lobbed a fantastic ball over the back which had to be smothered into touch.

Italy thought that they had scored a second try from a quickly taken line out, but the pass through was deemed to be forward.

The Azzurri were again harshly denied moments later, as the ball appeared to be knocked forward by a Romanian finger in the lineout, but the attacking side were penalised.

Gori finally got his try on 24 minutes with the pick and drive seeing him bounce off a trio of Romanians to dive over the line, which Allan then converted.

Johannes van Heerden returned on 27 minutes and apologised to Poite, with Romania in the ascendancy camped within Italy’s five metre line.

The Azzurri displayed a lesson from Australia’s school of defending with a monumental effort to keep out sustained pressure from the men in yellow.

New Exeter Chief Michele Campagnaro limped off of on 34 minutes, but he will shortly return to this ground to resume Aviva Premiership duty.

Italy were three tries to the good with just 90 seconds of the half remaining, as Allan showed a great turn of pace to make a clean break through for a simple tap down. The Scottish born back then converted his own score to give the tier one side a 22-3 lead.

The Six Nations side squandered opportunities to go further ahead in the contest, and substitute back Adrian Apostol peeled off the back of an attacking scrum within three minutes of join the action, to give Romania hope.

Vlaicu swept home the conversion to make it 29-10 with 13 minutes to go. It also made him Romania’s highest ever points scorer in Rugby World Cup history.

On the 70 minute mark Allan scored his fifth kick from six attempts, to move Italy past the 30 point mark in a test for the first time in almost two years.

Confusion reigned supreme in the final six minutes, as the hawkeyed TMO spotted a Romanian grounding which everyone else appeared to have missed.

Valentin Poparlan was the bemused beneficiary, and claimed his seventh international try to produce another strong finish from the Romanians.

A pinpoint floated pass from Vlaicu out wide found Apostol on the wing to cross the whitewash for the second time this afternoon.

What comes next for both

Italy qualify for the next World Cup and they will pat themselves on the back for a job well done. Had they not suffered so many key injuries, they may have gone even further in this competition, but they beat the tier two teams in this Pool, to finish third as expected. Jacques Brunel now departs and come February, we may see a rather different looking Italy side in next year’s Six Nations, with many of the veterans having likely played their last international tournament.

Romania can count themselves unlucky in terms of a quick turnaround from their epic win over Canada, but they displayed fantastic energy levels from the bench in the final quarter of this match. The Oaks just missed out on what would have been an historic third place finish, but they contributed seven tries and plenty more besides in a robust World Cup cameo.

Man of the match: Eduardo Gori

The Azzurri scrum-half was immense in the absence of captain Sergio Parisse, as he marshalled the troops from the back and proved to be a real leader on the pitch. Gori took the game by the scruff of the neck early on and almost scored an outlandish individual try, before sniping from close range to extend his side’s lead.