Dean Richard’s Newcastle Falcons suffered a fourth consecutive defeat as their lacklustre defence was punished by  a rampant Worcester Warriors. The hosts secured the bonus point before the break with four tries in the opening 38 minutes at Sixways on Saturday afternoon.

Those scores came through Alex Grove, who touched down a pair of scores while Chris Pennell and debutant Bryce Heem also crossed the whitewash. Fly-half Tom Heathcote converted all four scores to give Worcester a 28-17 lead at the break.

Newcastle, despite their weak defence, stayed in the game through tries from Micky Young and Tom Catterick with fly-half Mike Delany reducing the deficit further with two conversions as well as a penalty.

However, the only points of a miserable second half came through a Catterick penalty for the visitors, meaning the Falcons were an agonising one point short of heading home with a losing bonus point, meaning they continue to sit bottom of the table.

Fullback Pennell was able to touch down for Worcester unchallenged after just five minutes following an excellent initial break from Heem. And Heathcote made no mistake with the conversion to give the hosts a seven-point lead.

The Falcons replied with a great try of their own through Micky Young after 13 minutes. The scrum-half received the ball via Ally Hogg, who pulled off a superb offload from the floor to give Young the simplest of finishes from just a metre out. Delany made up for a missed penalty minutes earlier by adding the extras, 7-7.

But the Warriors new addition Heem, who set up the hosts opening try, then touched down on debut to put Worcester back in front after 20 minutes. Pennell’s delightful flick on to Heem set the centre away in acres of space with him crossing the whitewash unchallenged. Heathcote again converted.

Worcester then added try number three through centre Grove just before the half hour. The Warriors exploited the Falcons wide open defence with the hosts again able to stroll in from the left wing to place the ball between the posts. Heathcote made no mistake with the simple conversion, 21-7.

Delany reduced the deficit with a penalty for the visitors but it didn’t last long as Grove grabbed his second try of the afternoon two minutes before half-time to secure the bonus-point for Worcester. The centre initially fell short before stretching over to force the ball down on the line. Heathcote continued to be impeccable from the tee to give the hosts an 18-point lead.

Replacement Catterick, who replaced the injured Alex Tait, though went over seconds before the break to give the visitors a lifeline. The stand-in fullback took advantage of some good work from Delany with a smart little finish, with the Falcons number 10 adding the extras to keep the away side within touching distance going into half-time, 28-17.

The Falcons further reduced the deficit nine minutes after the restart with Catterick kicking a successful penalty but that would be the premature end of the scoring as both sides from then on in made numerous handling errors in the closing stages, 28-20. 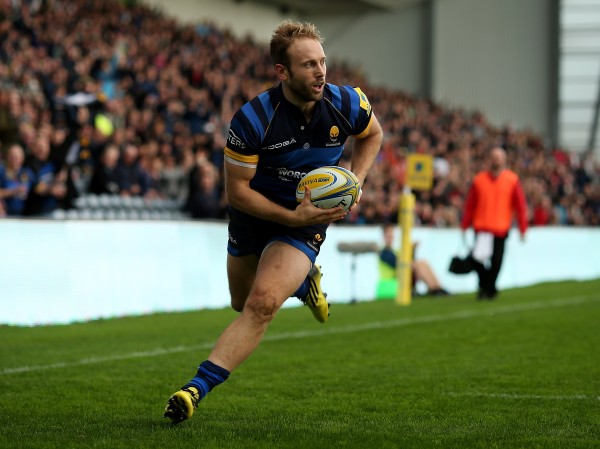 The strong carrying and intelligent running from Chris Pennell was simply too good for the Newcastle Falcons lacklustre defence. The fullback played a key role in the Warriors rampant first half, touching down a try of his own as well as playing a key role in Bryce Heem’s debut score. HIs consistency will be key to Worcester’s chances of survival.